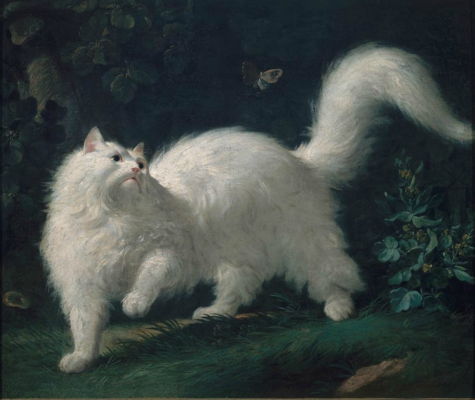 One evening, the good Pichard was returning from Haute-Chapelle, near the pond of Bain, where he had been courting his betrothed. At the foot of the cross in the square called la Croix des Haies he saw a beautiful big white cat. She miaowed tenderly, and crossed over to rub herself against his legs. From that day, every evening and at that same spot he would meet this lovesick cat. So it went on until he was married to Nanon, his fiancée.

Months passed and Pichard forgot his encounters with the white cat. Then, one night, he awoke with a start to discover he was alone in bed. His beautiful Nanon was nowhere to be seen. Pichard found this very strange. Stranger still, in the early hours of dawn, just as he was opening his eyes, his wife quietly slipped into the bed. Pichard questioned her, but though he became annoyed, threatened her and finally sulked, she did not say where she had been, except to say she was a faithful wife to him.

Though Pichard sulked and glowered, that evening he lay down beside her and all seemed normal. Suddenly, at midnight, Pichard woke to find Nanon was again gone, but the great white cat from la Croix des Haies was purring beside him in the room. Still sulking, he went back to sleep and in the morning his wife was beside him again.

Night after night the same thing happened. Pichard wondered how his wife got out since the door was firmly bolted. Fascinated, he set himself to watch. Though he fell asleep before his wife left, he managed to wake up nearer dawn and kept himself awake to wait for her return.

To his surprise, he saw a small white paw slipping through the doorway to reach the bolt. Softly Pichard rose, and struck the intruding paw with a thunderous blow of his hatchet, chopping it clean off. A horrible scream came from the other side of the door.

For eight days Nanon did not appear. Eventually she returned, her head low, her face flushed with confusion. She passed her husband, went straight to her bed without a word and wept. Pichard saw that her hand had been chopped off at the wrist.

Related Posts
The Greedy and Ambitious Cat
The Enchanted Watch
Why the Ashanti Cat Sleeps Inside
The Priceless Cats
Popular Posts
Search
Cat.egories