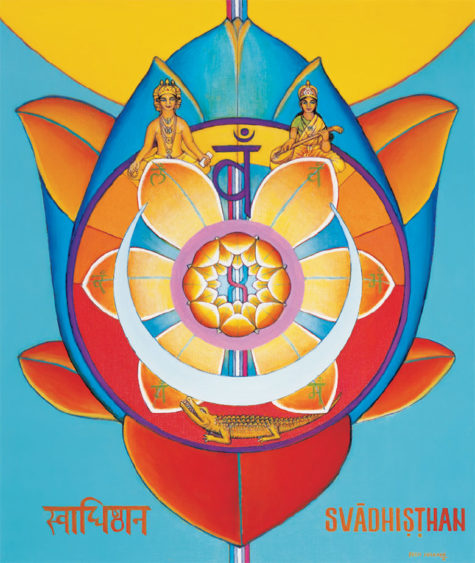 The second Chakra, Svadhisthana, is also known as the creativity and sexual Chakra. It is located above the pubic bone and below the navel, and encompasses the genital region and the hypogastric plexus. The word svadhisthana can be translated as “the dwelling place of the self,” and the element of the second Chakra is water, which equals cohesiveness.

A balanced second Chakra leads to feelings of wellness, abundance, pleasure, and joy. When this Chakra is out of balance, a person may experience emotional instability, fear of change, sexual dysfunction, depression, or addictions.

You can open this Chakra with creative expression and by honoring your body. The energy of this Chakra is feminine, passive, and lunar.

Creativity: The Focus of The Second Chakra

As humans, it is part of our nature to create. This creativity can be expressed as procreation but the second Chakra energy is certainly not limited to making babies. When we cook, bake, or garden, we are creating. We create when we find a new solution to an old problem. Any time we take raw materials, physical or mental, and transform them into something new, we are using our creative energy.

The problem with creativity is that we are often discouraged from creative efforts, starting with education. Once we pass through the phase where coloring, painting, or cutting paper is completely acceptable, it seems that we must mold into less creative beings. In order to conform, follow the rules and fit in, we sometimes lose our creative energy and thus, our unique ideas in the process. Adults become used to following what’s right, the latest trend, or what’s acceptable to others. Then, when asked to abstractly invent something new, we might have a difficult time doing it.

Play Like a Child to Awaken Your Creative Energy

We might feel open and creative in some aspects of life, while self-conscious in others. Ask me to write a book or essay and I can perform with ease. But if you ask me to draw a picture, paint, or even create a great meal without a recipe to follow, I feel much less than skilled. But, if you told me I had to paint a nice picture because my life depended on it, I would most likely rise to the occasion. Why? Because I would take the risk to get the job done. 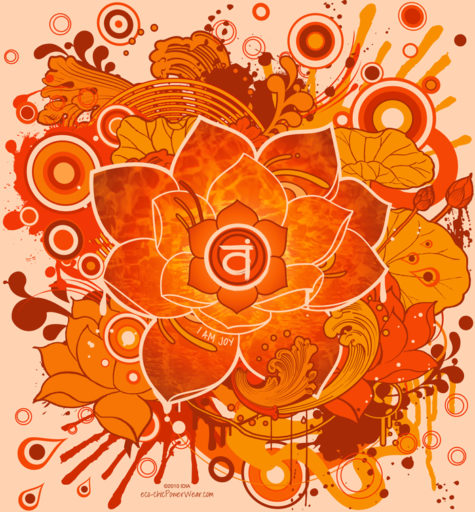 The reason, that we stopped being creative or stopped taking risks creatively, is because along the way, someone told us that we weren’t good or that we couldn’t do it. In opening your second Chakra energy, you must take risks and not be afraid of failure.

Play is a great way to begin this opening. Have you ever watched a child play? A child will spend several hours building a Lego tower, a sandcastle, or an exquisite dollhouse. Then, the same child will smash their masterpiece in an instant and start over from scratch as if it was no big deal.

Start to play like a child. If your gourmet meal doesn’t turn out, so what? If your potted plant dies in a week, plant another one. And yes, if your work project is a flop, it doesn’t mean your career is over. Like the child at play, start again. You have an infinite amount of creative energy within you, so use it.

How to Balance Svadhisthana

Besides being open to creativity in your daily life, you can balance the second Chakra by maintaining a healthy sexual life and honoring and respecting your body. Get in touch with your emotions and see if there are any feelings you’re holding onto. Make a commitment to process those emotions in a healthy way.

Left nostril breathing called Ida Nadi breathing will help to open up the second Chakra as it brings forth lunar energy. Simply close your right nostril with the first two fingers of your right hand and inhale and exhale through the left nostril, only for 8 to 10 breaths.

Meditation with focus on the second Chakra brings about personal magnetism, refinement in behavior, freedom from diseases, and longevity.

Other ways to open a blocked Chakra include using yoga, mantras, colors, and gems. 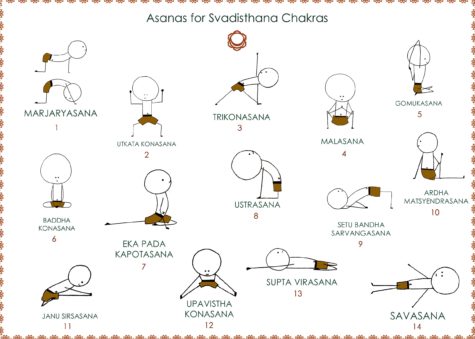 Yoga asanas that help to open and align Svadhisthana are …

The mantra sound that corresponds to the Sacral Chakra is the sound VAM. By chanting VAM, the vibrations will open and align this Chakra. The color for the second Chakra is orange and the gemstones for this Chakra are amber, calcite orange, carnelian, or hematite. 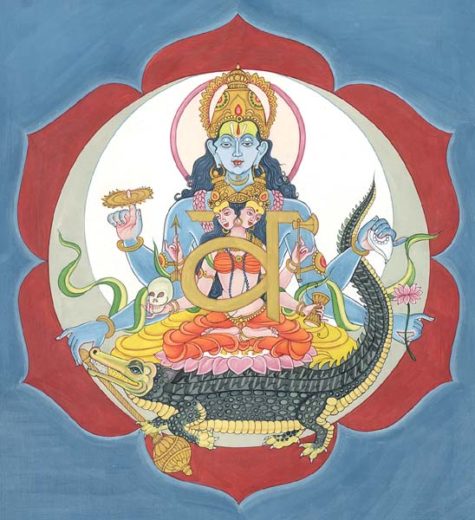 Svadhisthana, the second Chakra, is situated in the genital region, it has six vermillion lotus petals. The moon-shaped crescent is the yantra of this Chakra. The Chakra governs the principle of taste, Its element is water.The vital relationship between water and the moon is shown by the crescent yantra within the white circle of the water Chakra.

The seed mantra is Vam and the vital breath of the Chakra is Prana.

Above the mantra is seated the presiding deity Vishnu, the lord of preservation, the all-pervading life-force in the universe. Vishnu is in shining dark-blue, and he wears a dhoti of golden yellow. A green silk scarf covers his four arms. He is seated on a pink lotus, four-armed, holding a conch, a mace, a wheel and a lotus. He is ornamented with the crown, jeweled earrings, anklets and wears the wanamala on his neck.

Vishnu is seated on the Garuda, the king of birds. Garuda is the concentrated vayu power developed from the highest form of kumbhaka (breath-suspension) which is under full control of Vishnu. Garuda represents the five vayus within us: Apana, Prana, Samana, Udana and Vyana. From the Garuda process has been developed the practice of Uddiyana control, the control of the lower abdomen.

This means the Great bird of Prana, the life force is constantly forced to fly upward, ascending along Sushumna nadi the central channel. By concentration, control over the five prana forces is increased through the release of Kundalini Power, and consequently pranayama develops. Then Lord Vishnu begins to be awakened.

His energy is Rakini or Chakini Shakti, two-headed, four armed, holding an arrow, a skull, a drum, and an ax, seated on a red lotus. Rakini is one of the forms of Kundalini Shakti. She wears a red sari, and jewels encircle her neck and four arms.

The Chakra’s associated animal is the light grey or green makara (crocodile), an emblem of the waters and the vehicle of the god Varuna, lord of the sea. Varuna has full control over the water principle and the celestial ocean (the milky way), the medium through which the five prana forces exhibit their functional activities.

This subtle water in its essence is Amrita, the deathless substance, and in its gross form is blood and various external and internal secretions.