Kundalini and The Chakras 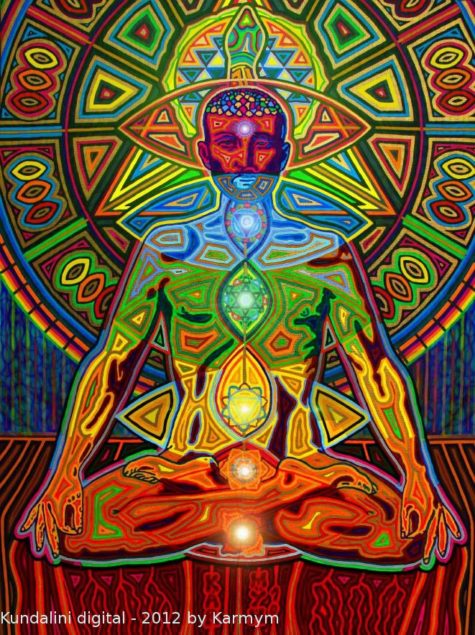 Chakras, meaning “wheel”, are psychic centers that lie along the axis of the spine as consciousness potentials. They are usually represented as lotuses. The chakras are not materially real and are to be understood as situated, not in the gross body, but in the subtle or etheric body. Repositories of psychic energies, they govern the whole condition of being.

What is most commonly known is a more recent system dating to around the eighth century C.E. with the main 7 chakras. But the ancient spiritual Indian texts refer to various other systems with variations in the number of chakras and their location.

When kundalini is struck, she awakens, uncoils and begin to rise upwards like a fiery serpent, breaking upon each chakra as she ascends, until the Shakti merges with Shiva in sahasrara chakra.

As kundalini reaches each chakra, that lotus opens and lift its flower; and as soon as she leaves for a higher chakra, the lotus closes its petals and hangs down, symbolizing the activation of the energies of the chakra and their assimilation to kundalini. The dynamization of kundalini when it passes from one chakra to another is an unfoldment of spiritual consciousness stage by stage and is said to enable the acquirement of yogic powers called siddhis.

The increasing number of lotus petals, in ascending order, may be taken to indicate the rising energy or vibration-frequencies of the respective chakras, each functioning as a transformer of energies from one potency to another. Each of the 50 petals of the first 6 chakras are associated with one of the letter of the Sanskrit alphabet.

Each of the chakras, according to the Tantras, corresponds to one of the elements of which the known world is compounded. Muladhara represents solidity; Svadhisthana, liquidity; Manipura, the gaseous; Anahata, the aerial; Vishuddha, the etheric, or space. One can see the whole process as a progressive transformation of the elements, with an increase of volatility. Each of the elements of the first five chakras are associated with a sound: Lam, Vam, Ram, Yam, Ham.

This ascent through the chakras can be viewed as an upward journey through the self which refines and subtilizes the energy that is the kundalini, until at the sixth chakra, the Ajna, center of command, a qualitative change has taken place. The chakras are centers of transformation of psychic or mental energy into spiritual energy.