The God of the Root Chakra 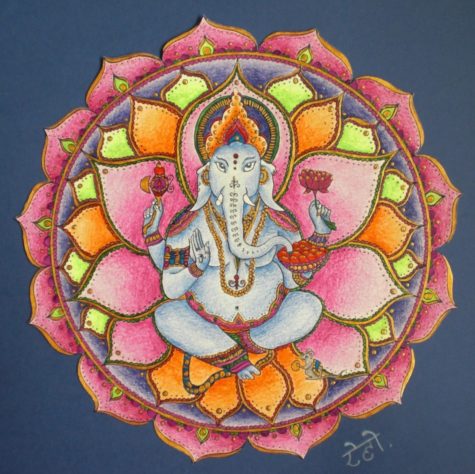 As per Kundalini Yoga Sutra, the human body receives its subtle cosmic energies from seven chakras that are ruled by different gods. The Muladhara is considered the “root” or “foundation” Chakra indicating “support” is one of the seven main chakras, located near the base end of the spinal column, primarily associated with the action of excretion. Muladhara Chakra is associated with survival and safety and teaches us the life lesson of standing up for ourselves.

An individual with a healthy Muladhara Chakra can be spotted out for a strong sense of security and practicality with a healthy physique. On the other hand, if this first Chakra is blocked, a person may lose the sense of belonging, have a weak physical structure, problematic bones, weight issues, and a fearful outlook towards life in general.

Lord Ganesha rules Muladhara Chakra, the root Chakra sssociated with family, stability and wealth. Mula means “main, root or original” and adhara means “base”, meaning that Lord Ganesha is the root cause of our familial happiness and domestic peace that are absent without his blessings.

Also in Ganapati Atharvashirsa it is given that “lord Ganesha continually dwells in the sacral plexus at the base of the spine, Muladhara Chakra. He resides permanently in every living being at the Muladhara. He guides all other chakras, thereby leading the forces that propel the wheel of life.”

Therefore, Lord Ganesha is the primal force that supports the foundation of every aspect of your life. He removes all the obstacles in all your undertakings. One should meditate on him every day in the morning. One can also use Ganesha Yantras or Rudraksha beads ruled by Lord Ganesha to strengthen your Root Chakra. 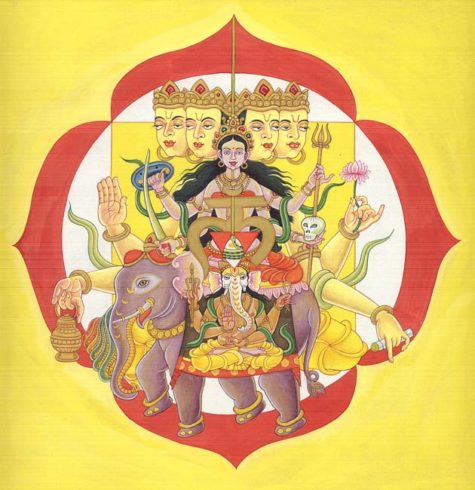 Located at the base of the spine, the pelvic floor, and the first three vertebrae, the root Chakra is responsible for your sense of safety and security on this earthly journey. The word Muladhara breaks down into two Sanskrit words: Mula meaning “root” and Adhara, which means “support” or “base.”

The root Chakra is comprised of whatever grounds you to stability in your life. This includes your basic needs such as food, water, shelter, and safety, as well as your more emotional needs such as letting go of fear. When these needs are met, you feel grounded and safe, and you tend to worry less day to day. 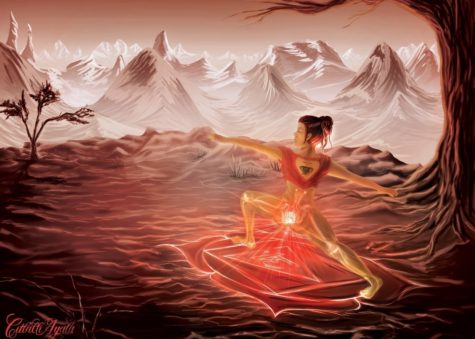 Whether or not you feel secure now often has less to do with what you have at your disposal and more to do with how safe you felt as a small child. When you consider psychologist Erik Erickson’s stages of development, the first stage—trust versus mistrust—is closely related to your root Chakra development. As infants, if your caregivers readily gave you what you needed to survive with consistency, you felt secure in the world. You felt that the world was a place that could be trusted to provide your basic needs. Yet, if your caregivers withheld or delayed in giving you what you needed, or if that giving was inconsistent, you may find yourself with first Chakra blockages.

Imbalances in the Root Chakra

If there is an imbalance in the root Chakra you may experience anxiety disorders, fears, or nightmares. Physical imbalances may manifest as problems in the colon, with the bladder, with elimination, or with lower back, leg, or feet issues. In men, prostate problems may occur. Eating disorders may also be a sign of a root Chakra imbalance.

How to Balance Muladhara

It does not matter if you call that higher power Consciousness, Mother Nature, God, or Spirit. Connection to universal energy will bring you a sense of peace and stability. The animals in the forest have no idea if and when they will find food each day, yet somehow they trust in nature to provide for them.

The sense organ that corresponds to the first Chakra is smell. While meditating, focus on the tip of your nose to help align the root and bring forth the qualities you need to balance your root Chakra.

Other ways to open a blocked chakra include using yoga, mantras, colors, and gems. 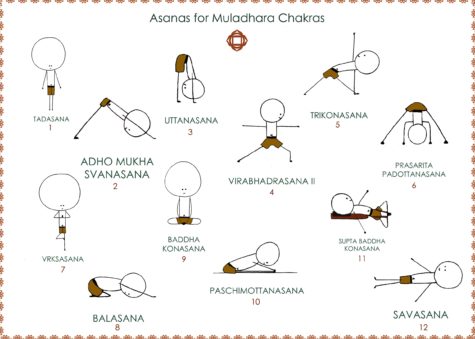 Yoga Asanas that help to open and align Muladhara are…

Women can also practice Kegel exercises, and both men and women can do Bandha yoga—where you lock or tighten certain areas of your body—to help bring strong energy and strength to the area of the first chakra.

Chanting or toning sounds can also help bring you back to balance just like music brings people together. Sounds create vibrations in the body, and these vibrations help the cells work together in synchronistic harmony. The mantra sound that corresponds to the root chakra is LAM.

Finally, colors and gems can help bring a chakra into balance. The root chakra’s color is red. Gemstones for the first chakra include garnet, red jasper, black tourmaline, and bloodstone. You can place the gemstone on the area of the chakra while lying down to help open and align it. 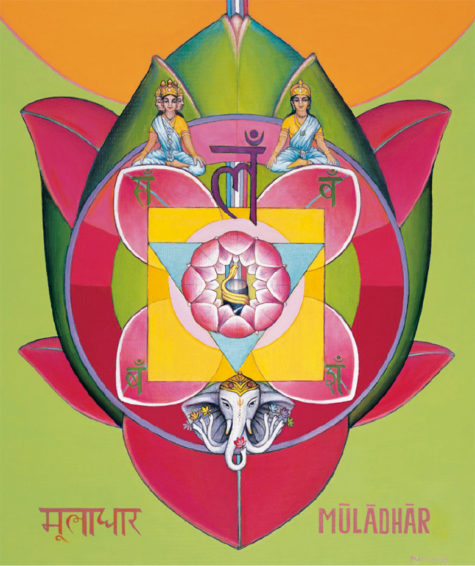 Muladhara is the root center of physical experience, located at the base of the spine, the sacral plexus. The square represents the earth itself, the four dimensions and the four directions. Four allows for completion, and earth embodies the elements and conditions for human completion on all levels.

The seed mantra is Lam, the yellow square represents the earth element. The Muladhara Chakra governs the vital breath Apana. An inverted triangle in the centre of the square encloses the unmanifest Kundalini, represented as a snake wrapped in three and a half coils around the svayambhu (self born) linga. Because her mouth faces downward, the flow of energy is downward.

The opening at the entrance of the sushumna is called brahma-dvara, the door of Brahma, which is closed by the coils of the sleeping Kundalini. As soon as one begins working with Muladhara Chakra, this dormant energy awakens, raises its head and flows freely into the channel of Sushumna, the central nerve canal that runs along the spine.

These two aspects of the kundalini: sleeping and waking, are identified as her “poison” and her “nectar.” The kundalini is poison when she remains asleep in the lower abdomen; she is nectar when she rises up through Sushumna, the medial channel, to reunite with Siva, the Absolute, in the yogin’s cranial vault.

In the pericarp is found the presiding deity Brahma, the lord of creation. His skin is the color of wheat, he wears a yellow dhoti and a green scarf. Brahma is four-faced, four-armed, holding in his upper left hand a lotus flower, the symbol of purity.

In his second left hand he holds the sacred scriptures. In one right hand he has a vase containing nectar, this is amrita the precious fluid of vital potency. The fourth hand is in Abhaya mudra, the gesture of dispelling fear.
The Chakra’s associated animal is Ganesha, the elephant headed god. Ganesha is the lord of all beginnings and is invoked to bestow protection over all undertakings. His skin is coral orange. He wears a dhoti of lemon yellow color. A green silk scarf drapes his shoulders. He has four arms to serve him while he acts as the destroyer of obstacles. Ganesha is the son of shiva and parvati. He holds a fragrant ladu, a lotus flower, a hatchet. The fourth hand is raised in the mudra of dispelling fear.

The energy, or shakti, of Brahma is called Dakini. She is in shining pink with four arms holding a skull, a sword, a shield and a trident symbolizing the forces of the creator, the preserver and the destroyer. 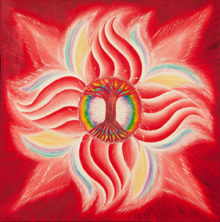 The Root Chakra is located at the base of the spine and is associated with the color red. It is the lowest energy vibration, correlating to the physical plane of existence. It is effected by concerns of basic survival and sustenance (home, food, career). It is connected to the urinary tract organs.

Too much energy focused through this chakra brings out the following behaviors: Egoistic, domineering, greedy, sadistic, sexual energy entirely genital.

The Root Chakra is our connection to the earth. This is where we connect to our survival instinct, here we can feel emotionally stable and physically fit and healthy, balance is the key part to this chakra and if we have that, we will be a grounded person.