The Patron of the Ganas 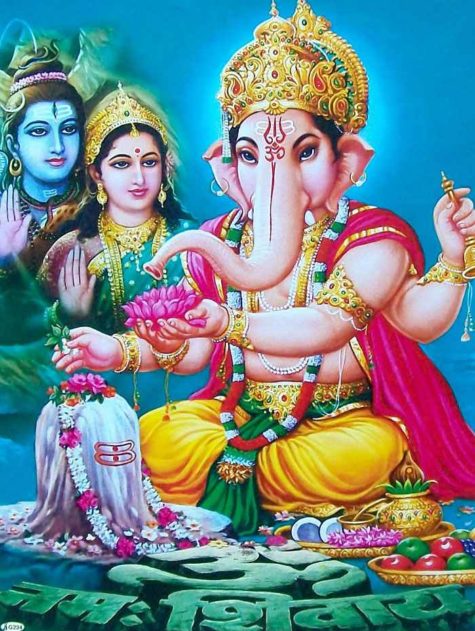 There is a very meaningful story which reveals the way in which this god became the patron of the ganas thus acquiring the title of “Ganesha”.

In the ancient times, Shiva was the single master of all gods, demigods, humans, demons, phantoms, spirits and all other existing beings. But because he was in continuous divine ecstasy (samadhi), it was highly difficult for gods and for the other beings to communicate with him. Whenever they had problems, they had to spend hours singing hymns, praising and praying for Shiva to regain normal state of consciousness. This is why the ganas felt like they needed another leader, who was easier to appeal to. to resolve their problems and protect them in times of need.

They came to Brahma with this issue but he could not resolve it, so he asked for Vishnu’s help in order to convince Shiva to establish a new Ganapati (leader of the ganas). Vishnu suggested they should choose from one of Shiva’s two sons: Kartikeya (also known as Subramaniyam) or Lambodar (Ganesha the fat). In order to find out which of the two deserved the title of Ganesha, all the gods and demi-gods chose to organise a contest.

On the set day, they all came witness the contest, where Vishnu was the judge. Shiva and Parvati were also present, seated in the middle. At the established moment, Vishnu announced the test of the competition. The two competitors had to go around the Universe and the one who would arrive first was to receive the title of Ganesha, master of all ganas.

After the announcement of the test, Kartikeya flew away into space, riding his extremely fast peacock, in order to go around the Universe as quickly as possible. Meanwhile Ganesha remained seated on his rat, without moving from his place. Vishnu, seeing him standing still, told him to hurry.

At Vishnu’s insistence that he should begin the contest immediately, Ganesha smiled and paid homage at the feet of his father and mother, then he humbly saluted all the other gods and demigods, flying away on his rat. They were all astonished when they saw that instead of riding towards cosmic space, Ganesha flew around Shiva and Parvati.

After he rode around Shiva and Shakti, Ganesha returned to the starting point, kneeled before his parents and said: “My task is complete. I have gone round the whole universe.”

“No, you did not!” the gods and demigods exclaimed. “You did not go anywhere. You are lazy”

Ganesha then addressed Vishnu, his hands in a gesture of prayer: “I know you understand the significance of my actions, but in order for the others to understand me as well, I shall say the following. I have completed my task of going round the Universe because all this world of phenomena, names and shapes is nothing other than a manifestation of my Divine Mother and my Divine Father. They are the source of all what exists. I went to the source, which is the Truth, the essence of the whole existence and all phenomena. I know this world is an ocean of relative existence, that it is an illusion that has no sense to renounce the Ultimate Truth in order to go around illusion. My brother is still circling this Universe. When he arrives at the Truth, it will be the same Truth that is Unique and in relation to which all is an illusion, including you and me.”

This statement offered a glimpse of genuine understanding to his listeners who were both astonished and delighted at his wisdom. Applauding his refined judgment and enlightening action, they accepted fat Ganesha as their patron. While Vishnu marked Ganesha’s elephant forehead with the sign of victory (tilak), Kartikeya returned, tired, from his voyage around the world. He got upset and argued against Ganesha’s victory.

The gods then told Kartikeya about his subtlety and wisdom and also said the following: “You went towards matter, which is illusory. You went around the phenomenal world, whose existence is relative and this is why you could not directly perceive the Ultimate Truth. It is the source. The world of phenomena is maya (illusion).” Kartikeya realized he had been fooled by maya and that his rush into the ever changing world of phenomena was in vain. Therefore all his efforts had been pointless for having chased a mirage. Kartikeya had behaved like all the other mortals who take the world of names and shapes for the actual reality, thus being trapped by maya. He accepted his defeat and the one whose wisdom had gone beyond material existence was offered the title of “Ganesha”.

Then Vishnu also decided that from that moment on, all beings should beg for Ganesha’s grace in the beginning of all their actions. Those who invoke him this way shall face no obstacles when accomplishing their beneficent goals and their path will be easy and without difficulties.