The Story Of Kubera’s Downfall 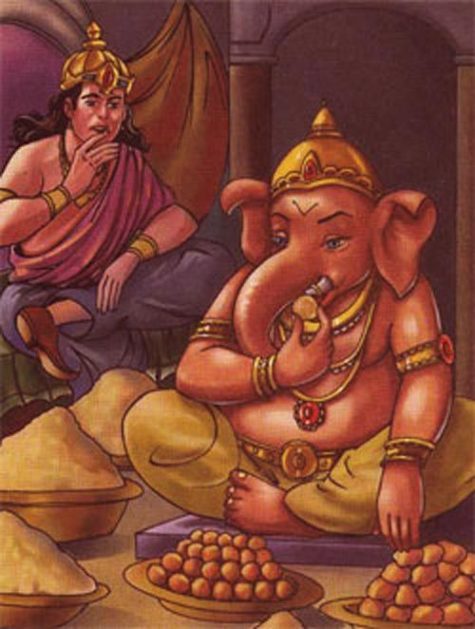 Kubera was a renowned God who was very popular for being the wealthiest of them all in the entire universe. He had a treasure trove of wealth and would hoard everything to himself with pride.

One day, he invited many guests over for dinner, including Shiva and Parvati. But they both could not attend the dinner, so they sent over Ganesha as their representative. Ganesha’s noticed how Kubera’s behavior was and he decided to let his antics loose. He began devouring the dinner speedily and ended up finishing all the food leaving barely anything for the other guests.

Yet his hunger was not satiated. So he ended up entering Kubera’s wealth collection and start eating all the gold and wealthy items. Still unsatisfied, Ganesha then proceeded to eat Kubera himself, who ran to Mount Kailash for protection.

Shiva, seeing the reason behind Ganesha’s doing, offered a simple bowl of cereals to Ganesha. He ate them and immediately was satisfied. Kubera learned not to amass wealth greedily and agreed to distribute it among everyone.

The story shows how greed and pride can be harmful to a person and it is necessary to be considerate towards everyone.

Posted in Stories | Tagged Kid Stuff, Kubera, Mythology, Shiva | Leave a comment
Related Posts
How a Mouse Became Ganesha’s Vehicle
The Story Of Parvati’s Wounds
The Patron of the Ganas
Ganesha and Science
The Story Of Ganesha’s Single Tusk