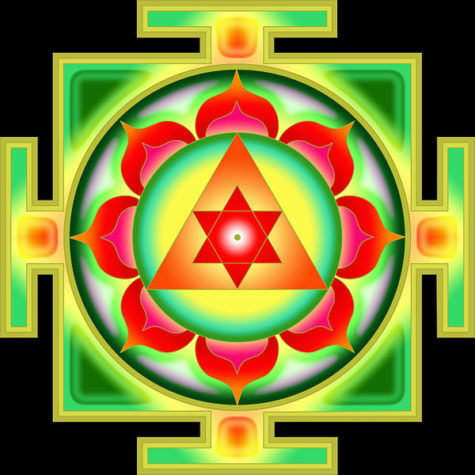 Meditating and focusing upon Ganesha’s yantra grants a state of inner balance.

Its background is vivid green. Green is a blend between warm yellow and cold blue; therefore it is color of balance. Focusing upon it generates its complementary color, red. Red is a color that can be easily noticed from a distance, being the symbol of life and inspiration, of revolutions and of the release from rules and restrictions.

The eight petal lotus stands for the eight aspects of Prakriti (the primordial nature):

The yellow triangle pointed upwards, where the 6 pointed star is depicted, stands for the masculine sap (the vital essence), the elixir of immortality. The color of this triangle is the same as Ganesha’s skin.

Bindu, the point located in the middle of the central triangle represents Ganesha himself. Meditation upon this bindu is the main goal for which the yantra is worshiped. Its color is golden yellow, a color that is appealing and relaxing at the same time.