The Story of The Lunar Curse 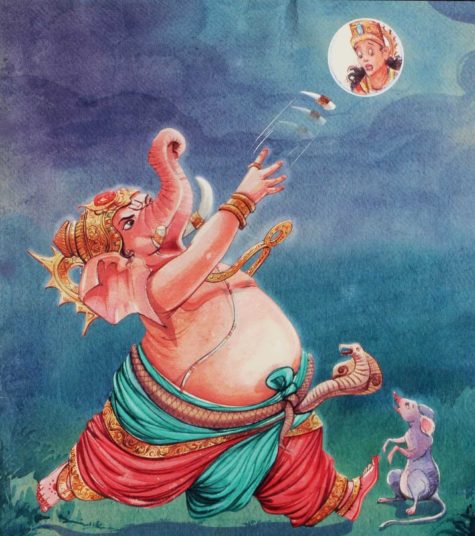 This story follows right after the proceedings of Kubera’s dinner.

After eating to his will, Ganesha’s stomach had become terribly large and he got a pot belly. Walking around with it became difficult for him and as he moved, he ended up losing his balance and stumbled and fell down. The moon, who was watching all of this, began laughing at Ganesha’s predicament.

Seeing moon humiliate him, Ganesha cursed the moon, making it completely invisible. The moon, realizing its mistake, began pleading to Ganesha for forgiveness. Relenting to his incessant apologies, Ganesha then decided to set in a cycle where the moon appeared and disappear every 15 days.

One should never laugh at somebody else’s problems or deformities. This is impolite and is not a sign of good behavior.

Posted in Stories | Tagged Kid Stuff, Moon, Mythology | Leave a comment
Related Posts
The Story Of Ganesha’s Single Tusk
How a Mouse Became Ganesha’s Vehicle
The Story of Shiva’s Failed Battle
Why Ganesha Has An Elephant Head
The Lord Who Is Hidden In All Things