If you are seeking new opportunities and wish to break down any obstacles that stand in your way, a Ganesha Road Opener Ritual just may be your answer! 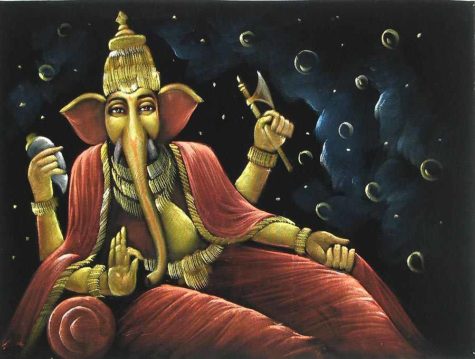 To perform a Ganesha Road Opener Ritual, print out a picture of Ganesha and place it on an altar. You will also need a yellow candle, candy, a simple plate, a bowl of fresh water and some fresh flowers. Begin by cutting the flowers and placing them in the bowl of fresh water. I prefer to cut the flowers down to simply the flower tops and allow them to float in the water.

You will also want to add a couple drops of Ganesha Oil into the water as you do this. On your plate, place any items that reflect what you wish to accomplish. For example, you can place your business cards, some new silver coins, a job application, a prayer, petition, photos or even an important business contract. Get your yellow candle and anoint it with Ganesha oil, drawing the oil up the candle towards the wick.

Place the candle in an appropriate candle holder and then put it on the plate with your items. When you are ready, light the candle and say a prayer. When the candle has completely burned down, take all the remains and bury it in a flower pot.

Here is the easiest and most effective way to ask Ganesha for help:

That’s it! It’s that easy. When you have done this once, it is said that you will then have a permanent and ongoing relationship and connection with Ganesha. Speak to Him anytime you wish, as many times as you wish. It does not have to be a formal meditation. Take a moment in your day, if you feel the need, close your eyes and speak to him using the above method. 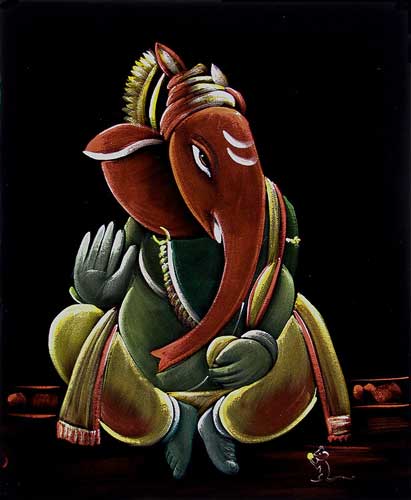 Invoking Ganesha With A Mantra

Another way that you can invoke the power of Ganesha is by repeating one of his mantras. In the simplest sense, mantras are ancient Sanskrit words of power. Each syllable of a mantra resonates a certain vibration. Mantras are used in meditation, to focus the mind, but they are also used to invoke the blessing of a Deity.

What is happening when you repeat a mantra over and over, is that you are matching your own vibrational frequency to that of the mantra and its purpose (wealth, health, success, knowledge, etc.). Each of the Hindu Deities has their own mantra or mantras, which invoke the type of energy that the Deity represents.

From the Pagan Calendar, we have this great info about the Ganesh Chaturthi: 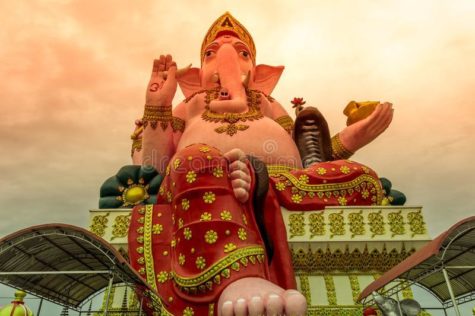 Vinayaka Chaturthi – also known as Ganesh Chaturthi – is a Hindu holiday festival that is observed on on the fourth waxing moon day during the month of Bhadrapada. This is around August or September on the Gregorian Calendar. The purpose of this festival is to honor the very popular Hindu God Ganesha, also known as Vinayaka.

The concept of Ganesh Chaturthi is that Ganesha comes to the home of his devotees on Ganesh Chaturthi day. He brings auspiciousness, hope, success and happiness to all homes. During His brief stay, He removes all obstacles. While returning He takes with him all problems and unhappiness.

Vinayaka Chaturthi is a festival that allows people to call on the power of Ganesh and to receive help from him in removing all of the obstacles that hinder their spiritual or mental path. It is also a time to ask for help in developing spiritual strength and resolve. It is a festival of great hope, joy and celebration that can be enjoyed by everyone regardless of class or wealth.

This remains one of the most widely celebrated festivals in the Country, partly because Ganesh is one of the most popular deities for worship. Ganesha, the elephant-headed son of Shiva and Parvati, is the supreme god of knowledge, wisdom, prosperity and good fortune. He is the Lord who is first worshiped before any holy occasion or puja.

His blessings are often invoked at religious ceremonies as he is the one who can remove all obstacles to success, particularly when people are starting a new business or enterprise. Ganesh is known as the giver of fortune and one who can help to avoid natural calamities. Ganesh is also the patron god of travelling. 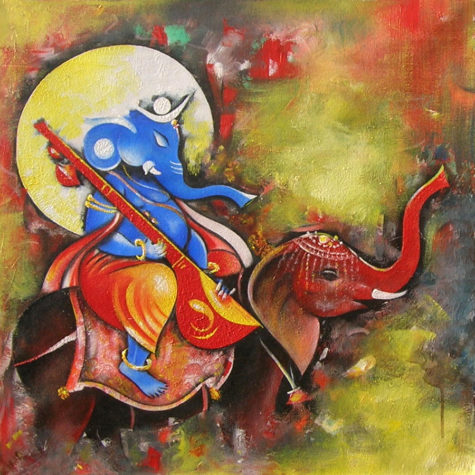 Lord Vinayaka is revered as the preserver of all good things and prevents Vigna (meaning obstruction/bad omen). His motto is Shubh-Laabh (good prospect and good prosperity).

The Significance of the Festival

Hindus believe that during Ganesh Chaturthi, Lord Ganesh visits his people on the earth to personally attend to their prayers. Therefore the divine energy of Lord Ganesh descends on the earth in large measures during the event. The idols of Ganesh newly bought and installed act as antennas to receive the energies of Lord Ganesh and transfer them to the people during worship. After the worship, this is why the idols specially installed for the puja are immersed marking the sendoff.

How the Ganesh Chaturthi is celebrated:

Ganesh Chaturthi is celebrated with great devotion all over India. People bring home murtis (Idols) of Lord Ganesha and celebrate the festival by worshiping the Lord in a special way for a day and a half, 3 days, 5 days, 7 days or 11 days depending on the family tradition and commitment of each individual. 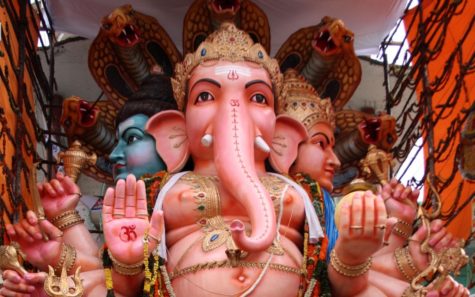 In certain parts of India, such as Andhra Pradesh and Maharashtra, the festival is celebrated for ten days and is a very public occasion. Elsewhere it may celebrated in homes, where hymns are sung and offerings made to Ganesh. Sweets are a common offering as Hindu legend has it that Ganesh liked them. On the last day of worship the idol is taken out in a colorful and musical procession to be immersed traditionally at a beach.

Rituals during the festival include:

Several months before the start of Vinayaka Chaturthi, a large clay statue of Ganesha is crafted. There is no set size limit for this murti, it can be smaller than an inch or be over twenty feet tall, depending on the person making it. This murti is then either placed in homes or set up in specially made tents so that people can pay respect to it. 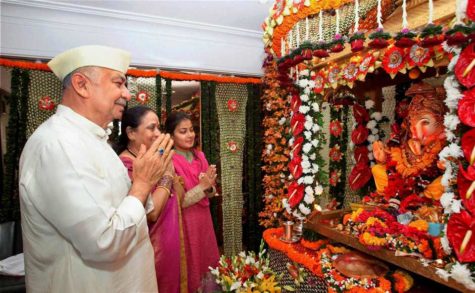 If you are interested in making one of your own, here’s a link to a short simple tutorial on how to make one out of paper mache. Some artistic ability is helpful but not required. Make A Paper Mache Ganesh

Ganesh Chaturthi starts with the installation of these Ganesh statues in colorfully decorated homes and specially erected temporary structures mantapas (pandals or colorful temporary shrines) in every locality. The mantapas are decorated specially for the festival, either by using decorative items like flower garlands, small banana saplings, lights, etc or are theme based decorations, which depict religious themes or current events.

The statues are worshiped with families and friends. The priest, usually clad in red silk dhoti and shawl, then invokes life into the statue amidst the chanting of mantras. This ritual, also known as Pranapratishhtha, is done to breathe life into the idol.

After life is breathed into the image of Ganesh, people pay respect to the murti by offering it all kinds of different items. The offerings include 21 durva (trefoil) blades of grass, red flowers, coconut, jaggery, 21 modakas. The statue is anointed with Kumkum and Sandalwood paste. Vedic hymns from the Rig Veda, the Ganapati Atharva Shirsha Upanishad, and the Ganesha stotra from the Narada Purana are chanted.

For the next ten days, the statue is worshiped.

Uttar Puja is performed in order to provide a farewell to Lord Ganesh just before the immersion. Here is the step by step procedure of Uttar Puja.

Light a lamp near the idol and decorate the idol with flowers. The puja will consist of offering Achamaniyam (water to drink), Sankalp (determination), chandanarpan (sandal paste), pushpa puja (puja with flowers), Durvarpan (offering durva grass), dhopp and deep darshan (offering incense and camphor light), Nivedan (offering some dishes and fruits). Say the prayers, chant Ganesh mantras and then do arati. Then do namaskar and move the idol a little with your right hand to mark the conclusion of uttar puja.

On the eleventh day, after the Uttar puja, the Ganesh idols are taken in procession with a huge fanfare to the water bodies. The crowds shout the names of Ganesh in ecstasy and make the procession a colorful and vibrant event. The idols taken in the procession are of different sizes, models and colors. They are carried through the streets for all to see. When this has concluded, people once again pay homage one last time before they are taken to the river and submersed. 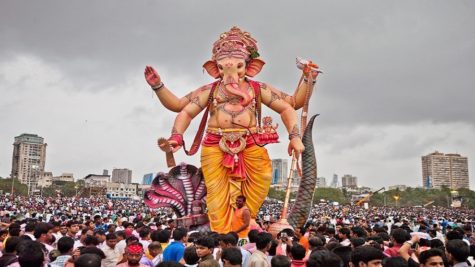 The divine energies in the idols are transferred to the waters and then to the larger world. Therefore through the process of Visarjan, three objectives of the devotees are fulfilled namely saying thanks to Ganesh for the favors received, giving a sendoff to the Lord and sending the divine powers of the Lord for the benefit of all.

The idols are immersed one by one in the waters either manually or with the help of a crane. Usually, curd rice or puffed rice is made a bundle and sent along with the idol as a mark of giving food for the deity to have while journeying. After the visarjan, some sand is collected from the spot and sprinkled around the home. 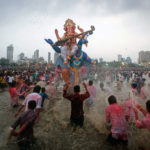 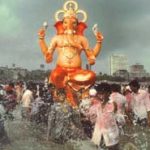 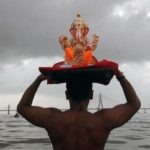 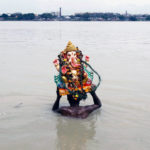 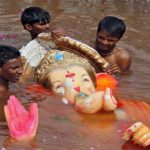 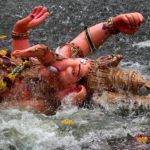 Many of the Ganesh idols will be placed outside under Bodhi Trees (Sacred Fig). The Bodhi tree is revered as a great source of remedies and is used to treat up to 50 different ailments. It also has a unique ability in that it can produce Oxygen at night-time instead of Carbon Dioxide. These healthy aspects of the tree make it a popular place for people to go to worship, as it is seen a great healer to naturally cure illnesses.

Performing A Puja At Home:

Every Hindu puja starts with the invocation of God in the object of worship in order to accept the puja and prayers. After the puja, there is a ritual called ‘Yathasthan’ meaning giving a sendoff to the deity worshiped. This is the spirit and logic behind Ganesh Visarjan also. Spiritually, this process prepares a man to move from the form to the formless state of God. 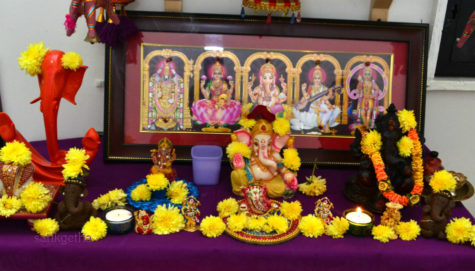 Here are the things which you will need for Ganesh Chaturthi Puja.

Sweep and wipe clean your house. Bring the idol of Ganesh at home and you can invite your friends and relatives for the Puja. Let your entire family gather at the time of Puja. Recite Ganesh Shlokas to welcome the Lord in your house.

Many families invite Pandits or Brahmins to do Ganesh Chaturthi Puja at home so that they can perform the Puja of Lord Ganesh the right way. For any Puja or Vrat you need two things – cleanliness and devotion. This will help you get the blessings of Lord Ganesh.

There is a significance of number 21 in this Puja and so people offer 21 Durva grass blades and 21 Modaks. 21 signify – 5 organs of perception, 5 organs of action, 5 vital airs, 5 elements and the mind.

However, when you are performing Ganesh Chaturthi Puja at home you can be flexible. All you need to have is clean body and mind and the thing that is most important is devotion and not the ritual. So, try to keep things simple and concentrate on the Puja.