The Significance of Ganesha 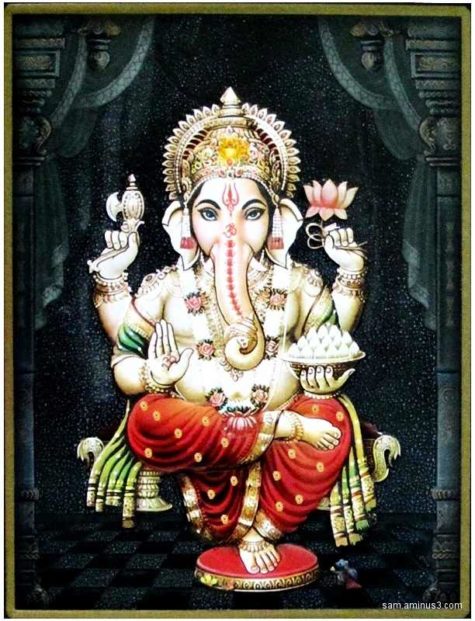 The Divine Mother assumes infinite names and forms, each of which expresses a different facet of Her being. The deity Ganesha, Her first-born son, is a case in point. Ganesh is a compound of the Sanskrit words gana and isha. Gana means “individual beings, independent units, segments of light, discrete bodies of Divinity, unique forces, emanations of Divine Light, attendants of the main deity.” Isha. means “one who is capable of doing what he wishes, capable of refraining from what he does not wish to do, and capable of undoing that which has already been done” – in short, the Almighty Lord.

Ganesha dwells eternally in the womb of the Divine Mother. He is the “firstborn one,” emerging from Her before any of the functioning forces of the universe emerge. In their manifest form all these forces center around this primordial force – Ganesha is the locus for all that exists. He establishes law and brings order out of chaos, causing the universal forces to function coherently.

The first step in bringing order out of chaos is the emergence of the law of gravity, and Ganesha is the presiding deity of that law. At his behest the force of gravity captures all the matter and energy emitted by the primordial Divine Force and gives direction to its outward movement. Ganesha himself is the center of all gravitational energy, and as such he supervises all activities, from the microcosm to the macrocosm-everything in the universe is held by the invisible strings of gravity, while gravity itself is held by Ganesha. The forces of creation, maintenance, and destruction are held in harmonious balance by his will, and that is why this firstborn child of the Divine Mother is called “Ganesha,” the lord of all entities and functioning forces of the universe.

According to the chakra scheme of kundalini yoga, Ganesha resides in the first chakra, the muladhara. Mula means “original, main”; adhara means “base, foundation.” From the standpoint of manifestation, or outward expansion of the primordial Divine Force, the muladhara chakra is the principle on which everything rests. In his visual form at the muladhara center, Ganesha is described as an enormous man with the head of an elephant. He is heavy and strong, capable of crushing obstacles into dust. Seated at the base of the spine he holds, supports, and guides all other chakras, thus governing the forces that propel the wheel of life.

To understand the symbolic meaning of Ganesha’s personality we have to examine his personified form. Half human and half elephant, he represents human intelligence wedded to the strength of an elephant. The parts of his body are disproportionate: he has big ears, small eyes, a long trunk,a massive belly, and small feet. He is paradox embodied: although he is enormous, his vehicle is a mouse; he consumes huge quantities of food, yet he is an ascetic; he is fat and his legs are short, yet he is master of the dance.

His boundless intelligence is symbolized by his big head.The epithet given to him in both Vedic and tantric scriptures is Brahmanaspati, “lord of knowledge and intelligence” or “lord of pervasiveness.” The scriptures also refer to him as Jyeshtha Raja, “the eldest son,” even though he was never born.

Ganesha’s massive belly symbolizes his capacity to consume and contain the universe that evolves from the Divine Mother. As the lord of gravitational energy he has the capacity to pull anything toward himself and process it as he wishes. He also sets the wheel of karma in motion. That is why the scriptures describe him as Karma Adhyaksha, “the one who presides over karmic law.”

Ganesha is immortal. In him lies the seed of omniscience,and the most subtle mysteries of the universe are known to him, including the mysteries related to our mind, karma, and the cycle of birth and death. The rays of light emanating from him enable us to comprehend our deeply rooted karmic impressions and discover how to attain freedom from the binding forces of our mind. Only then are the obstacles emerging from its unlit corners fully destroyed. Hence he is called Vighnesha, “the lord who removes obstacles.”

Like fire,Ganesha consumes anything in his path with his enormous appetite. He is pleased with any offering we make to him with love – he gladly accepts our problems and concerns and swallows them, granting us freedom once and for all. No force other than Ganesha is capable of consuming our ignorance, egoism, attachment, aversion, and fear of death.That is also why he is called Vighnesha, “the lord who removes obstacles.” 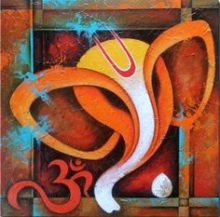 His big ears symbolize his limitless capacity for hearing.He hears our prayers regardless of how we recite them – he does not care whether or not we sing hymns in his praise, he considers our heartbeat and brainwaves to be forms of prayer.Any irregularity, whatever the cause, catches his attention.Being Ganesha, the head of the family, he rushes to our rescue.For these reasons, too, he is known as Vighnesha, “the lord who removes obstacles.”

The fluid that sometimes flows from the temporal gland of male elephants flows constantly from Ganesha, and drawn by its sweet aroma insects drink the nectar. Intoxicated, they buzz around his ears, which he flaps gently in order to ward them off. This tells us metaphorically that Ganesha’s head, the treasure-house of wisdom, is so filled with the sweetness of love and compassion that it flows from him effortlessly and incessantly and is granted even to those who come to him with a noisy mind.

Set in his enormous head, Ganesha’s eyes are small because he has little use for them. However his third eye, the eye of intuition, is wide open, and he sees past, present, and future simultaneously. Seated as he is deep within every living and non-living entity, he sees everything. That is why he is called Adi Rishi, “the primordial seer.” He is the eternal source of knowledge – revelation flows through him. The scriptures refer to him as Parama Guru, “the master of all previous masters.”

The scriptures identify Ganesha with the sacred sound Om, and the shape of his trunk resembles the word written in Sanskrit. Because Om is the source of all mantras, repeating any mantra is tantamount to meditating on Ganesha.All sounds, words, and mantras in their dormant form rest in the muladhara chakra, where Ganesha resides.

Though Ganesha’s feet are quite small, he outruns all the forces of the universe – because he pervades everything, he is already everywhere. Without moving, the lord of gravitational energy makes everything move. With his enormous body and tiny feet Ganesha dances to the song of the Divine Mother, and exhilarated by his movements, She joins in.Then, as mother and son perform their cosmic dance, all the arts and sciences spring forth. Unable to contain the divine ecstasy, the sages emerge from their absorption in Ganesha and assume their roles as our guides. 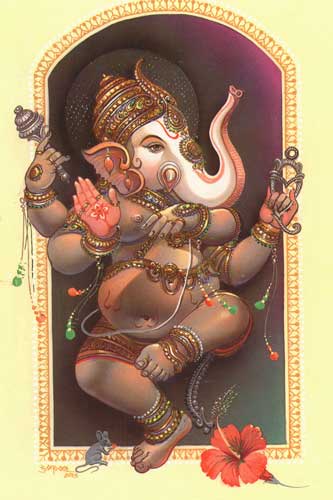 This cosmic dance symbolizes the process of kundalini awakening. The forces of darkness can cast their spell of slumber on us only as long as we are outside the pale of this dance. Thus Ganesha, the remover of obstacles, is the one who awakens the divine force in the form of kundalini shakti. He blesses us with shaktipata (the bestowing of divine energy). It is he who sends a sat guru (a true master) into our lives, and through his grace the forces of love, compassion, self-motivation, self-confidence, and determination unfold. Thus the scriptures assert that the door to the Divine Mother’s palace opens when Ganesha is pleased.

There are hundreds of ways to propitiate Ganesha and meditate on him. The tantric method, in conjunction with yantra sadhana, is precise and methodical. Those whose prolonged practice has gained them access to the muladhara center meditate on Ganesha by practicing the tantric method of kundalini yoga. To them, the human body is a yantra. Others draw the yantra of Ganesha on a gold, silver,or copper plate, on a silk cloth, on a wooden board, or on a piece of birch bark, and meditate on that.

From: Warrior of Light (India)

Related Posts
The 1000 Names of Lord Ganesha
Ganesha Lord of the Root Chakra
Who Is Ganesha?
A Small Poem
Lord Ganesha’s Tools