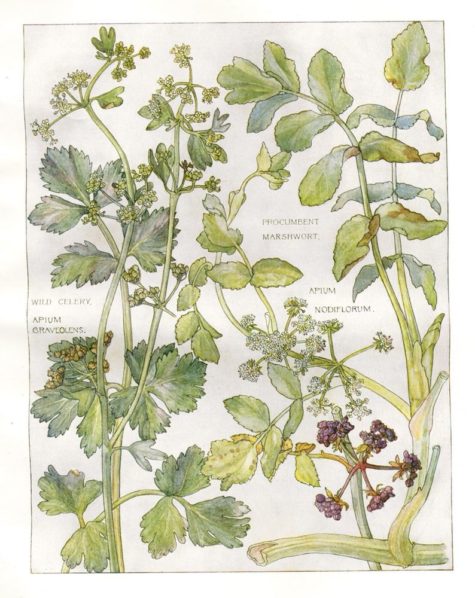 Wild Celery was used to crown the victors of the Greek Nimean games, held to honor Zeus. The pragmatic and epicurean Romans, meanwhile, exploited the herb’s culinary properties; the leaves, mixed with dates and pine kernels, made a standard stuffing for suckling pig during the empire.

In herbal medicine, Wild Celery is useful in hysteria, promoting restfulness and sleep, and diffusing through the system a mild sustaining influence. 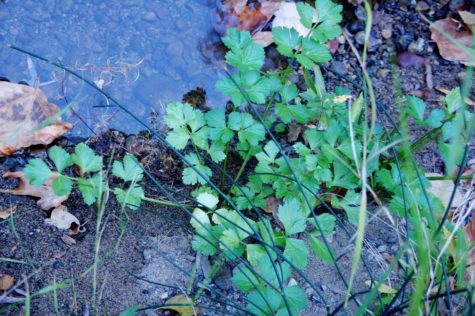 Wild Celery is a common name for several plants. It can also refer to:

In this article, we are exploring the wild growing forms of Celery, Apium graveolens. This is the original and wild version of the commonly known cultivated kitchen and supermarket Celery.  There is a bunch of information on the cultivated variety here: Celery. 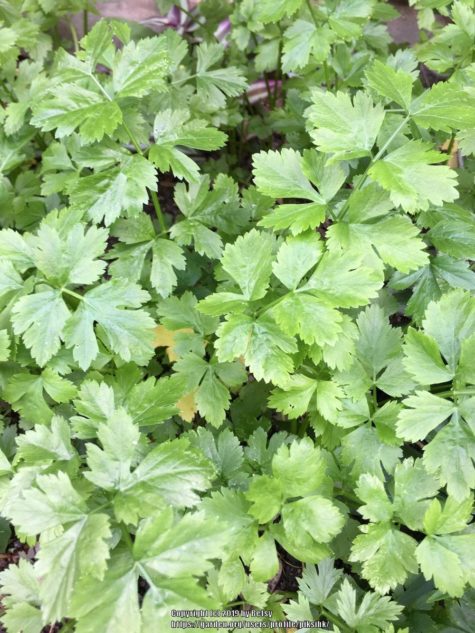 Wild and cultivated Celery can be used interchangeably, see also this in-depth information on the cultivated variety of Celery.

Celery is good combined with Scutellaria for nervous cases with loss of tone. On this account it is recommended to eat the fresh root of the Cultivated variety, as well as taking the oil or fluid extract.

It is said to be very good for rheumatism, when it is often combined with Damiana.

Prior to the 16th century, the Celery plant was used more as a medicine than a food. Celery seeds, leaves, stem, and root are used in a variety of traditional medicine systems, including the Unani tradition of ancient Persia and Arabia, Indian Ayurveda, and Chinese herbal medicine. As an herbal preparation, Celery seeds were consumed fresh or as a water decoction, or the seed powder or extracts were used. 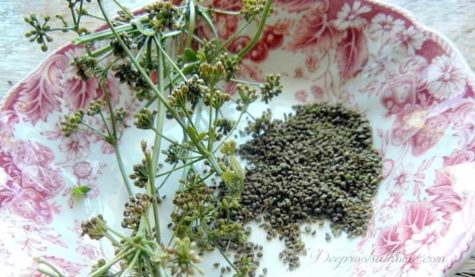 The first century medical text, De Medicina, written by Roman encyclopedist Aulus Cornelius Celsus, listed the use of powdered Celery seed pills for pain relief.Powdered Celery seeds were blended with honey to create a paste used topically as a poultice for a variety of inflammatory conditions such as boils, rheumatoid arthritis, gout, sciatica, and backache.

In Unani medicine, the Arabs obtained knowledge of the use of tukhme karafs, or Celery seeds, from Greek physicians including Dioscorides (first century CE) and Theophrastus (died 287 BCE).

The seeds of Celery are rich in pungent, astringent volatile oils that are used in a variety of preparations, including teas/decoctions and pastes. Celery seeds are considered a heart tonic and used to lower blood pressure. Other indications include hepatic and spleen disorders, brain disorders, body pain, and sleep disturbances.

Celery seed decoctions commonly were used for breathing difficulties such as asthma, bronchitis, and pleurisy, and were considered effective for treating measles and all types of fevers.Celery seed decoctions also were used to help dissolve both kidney and bladder stones and were also indicated in cases of sexual debility or low libido. However, Celery seed was contraindicated in cases of venomous stings due to its ability to thin the blood and rapidly circulate the venom through the body.

In Ayurveda, the traditional medicine system of India, Celery stalk juice was used for chronic lung congestion and weight loss as well as to stimulate poor appetite. The root, leaf, and seed are used in various preparations for purifying the blood, regulating digestion and bowel movements, calming the nerves, and curing gallstones and kidney stones.

Celery root was used for its diuretic properties and as a remedy for colic.Celery root tinctures are used as a diuretic in hypertension and urinary disorders.

India’s Materia Medica lists Celery as a diuretic, a litholitic (breaks urinary stones), an emmenagogue, and a carminative adjunct to purgatives.

Celery is a preventative treatment for rheumatism and gout and is also indicated as an antispasmodic for treating bronchitis, asthma and chronic lung congestion, and as a blood-purifying alterative for chronic skin disorders such as psoriasis.

Similar to Unani traditional medicine, Celery seed decoctions are used as an aphrodisiac to enhance libido and as a nervine to calm anxiety and insomnia.Celery seed extract is used similarly to improve kidney function and treat gout as well as bladder and urinary tract infections.

The typical medicinal dose for Celery seed is three to five grams. 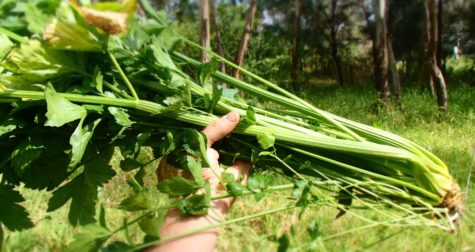 Wild Celery is not the easiest of plants to identify. Aside from rivers, ditches, and marshes, it grows besides the seaside and will reach 60 cm in height. Stems are solid, the leaves are fan-shaped and loosely toothed, and the tiny white flowers are borne in a compound umbel. Your nose may detect the plant before your eye, the aroma of Celery is distinct.

Wild Celery is readily distinguished from domesticated Celery by its thin wispy stems and long, toothed, lush leafy foliage. Its coloring is true green throughout, its aromatics herbaceous and an indicator of its flavor, layered with notes of chervil, fresh coriander, fennel and mint.

Wild Celery is classified within the culinary landscape as a cool tasting ingredient due to its high levels of the anise-flavored volatile compound, anethole. Other herbs and vegetables that carry the same cool tasting label include basil, clove, tarragon, mint and root vegetables.

Since Wild Celery is the ancestor of cultivated Celery, you can pretty much do anything with the former that you would do with the latter.

The stems, leaves and seeds of the wild version, however, are stronger in taste and texture. Try grinding the seeds and adding to salt to make Celery salt, or putting some finely chopped leaves in milk when poaching fish.

Soup and Wild Celery are a kitchen love affair. Stir chopped leaves into vegetable stews during the last 5 minutes of cooking (to retain both flavor and nutrients) or use the stems to make a piquant wild version of Celery soup.

The leaves, gathered in summer, are easy to dry, and are useful in flavoring dishes from stocks to stews to stuffings.

Wild Celery is very common throughout Asian markets where it is known as “kun choi” or “kin tsai.” 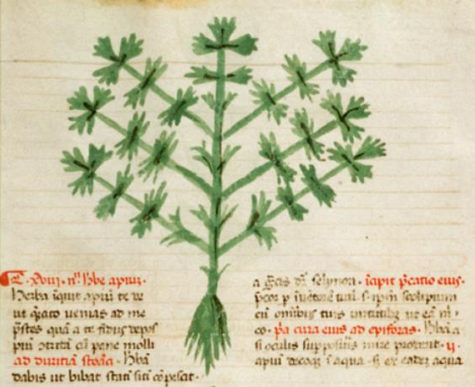 Celery seed is a lesser-known spice that has been used for thousands of years.. The Greeks, Romans, and Egyptians used the bitter leaves and aromatic seeds of the Celery plant in rituals and as a condiment and medicine.

The use of Celery was common in celebration practices as a symbol with two meanings: death and victory. Celery leaf garlands were used to adorn athletes in award ceremonies and to honor the deceased at funerals.

Considered a symbol of Chthonian deities (living in or beneath the earth) from ancient Greek mythology, Celery’s spicy odor and dark leaf color was associated with the underworld and death. In ancient Greece, Celery leaf crowns were placed on the dead and Celery wreaths were draped across graves. Celery leaves and flowers were part of the garlands found in the Egyptian Pharaoh Tutankhamun’s tomb (died ca. 1321 BCE).

Much more on the history, lore, and magickal applications of Celery can be found here: Celery. 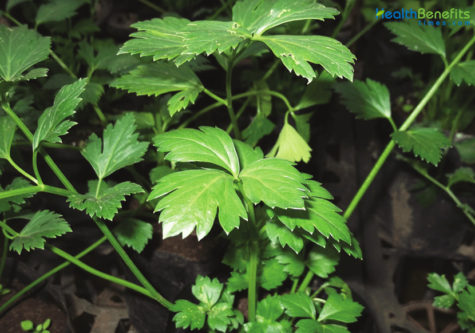 Celery oil and Celery seeds are likely safe when taken by mouth in food amounts. Celery is possibly safe for most people when taken by mouth in the amounts found in medicine for a short period of time. However, some people are allergic to Celery. Allergic reactions can range from skin inflammation to anaphylaxis. Celery can also cause sensitivity to the sun.

Celery is possibly safe for most people when applied to the skin in the amounts found in medicine for a short period of time. However, some people are allergic to Celery. Allergic reactions can range from skin inflammation to anaphylaxis. Celery can also cause sensitivity to the sun.

Celery oil and Celery seeds are LIKELY UNSAFE when taken by mouth in the amounts found in medicine during pregnancy. Large amounts of Celery might make the uterus contract and cause a miscarriage. There isn’t enough reliable information to know if it is safe to use Celery oil or seeds when breast-feeding. Stay on the safe side and avoid use.

Celery can cause allergic reactions in people who are sensitive to certain other plants and spices including wild carrot, mugwort, birch, caraway, fennel or coriander seeds, parsley, anise, plantain, and dandelion. This has been called the “Celery-carrot-mugwort-spice syndrome,” or the “Celery-mugwort-birch-spice” syndrome.

There is concern that Celery might increase the risk of bleeding when used in medicinal amounts. Don’t use Celery if you have a bleeding disorder.

Don’t use Celery in medicinal amounts if you have kidney problems. Celery might cause inflammation.

Levothyroxine is used for low thyroid function. Taking Celery seed along with levothyroxine might decrease the effectiveness of levothyroxine. But it is not clear why this interaction might occur, or if it is a big concern.

Celery might have an effect like a water pill or “diuretic.” Taking Celery might decrease how well the body gets rid of lithium. This could increase how much lithium is in the body and result in serious side effects. Talk with your healthcare provider before using this product if you are taking lithium. Your lithium dose might need to be changed.