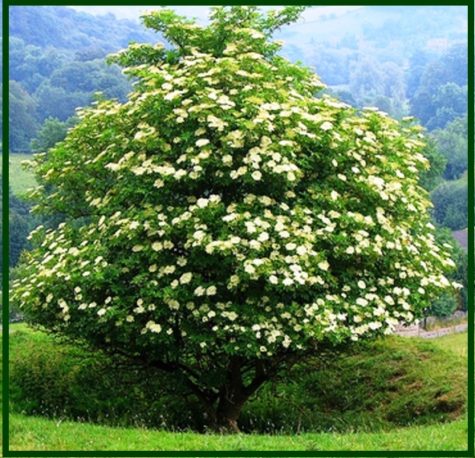 The elder tree grows in Britain and from Scandinavia to the coast of Africa, a twisted, shrubby tree, seldom more than 30 ft high and common in hedgerows and waste places. The strong smelling leaves are divided into broad leaflets, creamy flowers grow in sweetly scented clusters in midsummer and in the late summer black juicy berries ripen and fall.

Note: Do not confuse European Elder (Sambucus Nigra) with American Elder, Elderflower, or Dwarf Elder. There are other, similar elder species in Europe and North America but these have different properties.  For a definitive list of the various elder species, and to verify that you are using Sambucus nigra (European or Black Elder) visit this link via wikipedia: Sambucus

Elder has a very long history of household use as a medicinal herb and is also much used by herbalists. The plant has been called “the medicine chest of country people.”

The bark and leaves of the elder have a violent purgative action when taken internally and are not safe. However, used externally, the juice of the leaves is cooling, soothing and healing and thus has been a common and efficient domestic remedy for several thousand years. 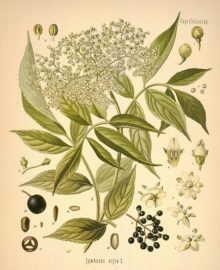 The inner bark is collected from young trees in the autumn and is best sun-dried. It is diuretic, a strong purgative and in large doses emetic. It is used in the treatment of constipation and arthritic conditions. An emollient ointment is made from the green inner bark. The pith of young stems is used in treating burns and scalds. A homeopathic remedy is made from the fresh inner bark of young branches. It relieves asthmatic symptoms and spurious croup in children.

The leaves are used primarily for bruises, sprains, wounds and chilblains. The leaves can be used both fresh or dry. The leaves are purgative, but are more nauseous than the bark. They are also diaphoretic, diuretic, expectorant and haemostatic. The juice is said to be a good treatment for inflamed eyes. An ointment made from the leaves is emollient and is used in the treatment of bruises, sprains, chilblains, wounds etc. It has been reported that Elder Leaves may be useful in an ointment for tumors.

The flowers are the main part used in modern herbalism, Elder flowers are ideal for the treatment of colds and influenza. They are indicated in any catarrhal inflammation of the upper respiratory tract such as hay fever and sinusitis. Catarrhal deafness responds well to Elder Flowers. The fresh flowers are used in the distillation of “Elder Flower Water”. The flowers can be preserved with salt to make them available for distillation later in the season. The water is mildly astringent and a gentle stimulant. It is mainly used as a vehicle for eye and skin lotions.

The dried flowers are diaphoretic, diuretic, expectorant, galactogogue and pectoral. An infusion is very effective in the treatment of chest complaints and is also used to bathe inflamed eyes. The infusion is also a very good spring tonic and blood cleanser. Externally, the flowers are used in poultices to ease pain and abate inflammation. Used as an ointment, it treats chilblains, burns, wounds, scalds etc.

Elder Berries have similar properties to the Flowers, with the addition of their usefulness in rheumatism. The fruit is depurative, weakly diaphoretic and gently laxative. A tea made from the dried berries is said to be a good remedy for colic and diarrhoea. The fruit is widely used for making wines, preserves etc., and these are said to retain the medicinal properties of the fruit.

The root is no longer used in herbal medicine but it formerly had a high reputation as an emetic and purgative that was very effective against dropsy. 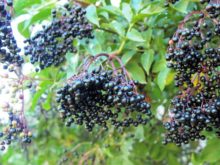 Most species of Sambucus berries are edible when picked ripe and then cooked. Both the skin and pulp can be eaten. However, it is important to note that most uncooked berries and other parts of plants from this genus are poisonous. Sambucus nigra is the variety of Elderberry that is most often used for health benefits as it is the only variety considered to be non-toxic even when not cooked, but it is still recommended to cook the berries at least a little to enhance their taste and digestibility. END_OF_DOCUMENT_TOKEN_TO_BE_REPLACED