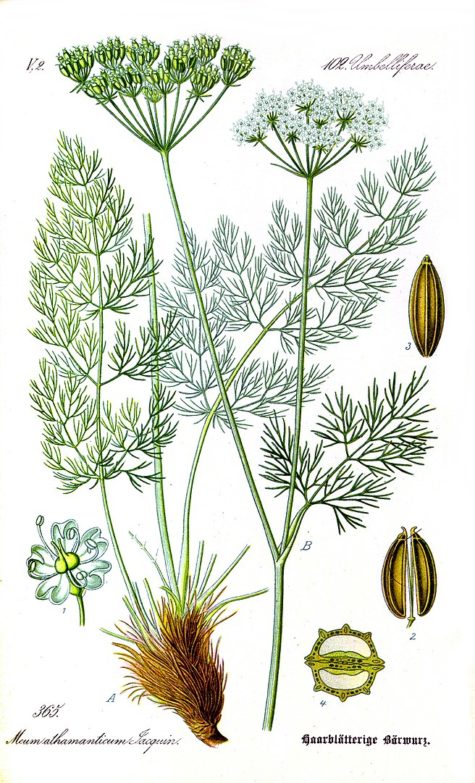 The scent of the root of Meum athamanticum, Spignel, Meu, or Bald Money has much in common with that of both Lovage and Angelica, and the root has been eaten by the Scotch Highlanders as a vegetable.

Spignel is an old herbal medicine. The whole plant is extremely aromatic. The delicate, feathery foliage has been used as a condiment and in the preparation of a wide variety of home remedies as a diuretic, to control menstruation and uterine complaints and to treat catarrh, hysteria and stomach ailments. 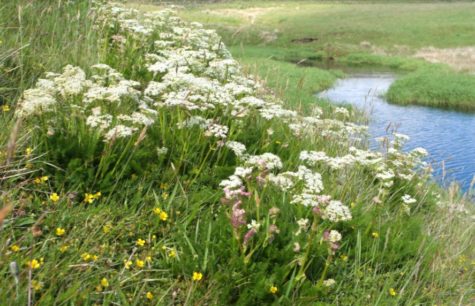 The plant is found in pastures and meadows at a certain altitude. Bald Money can be found as easily in the Scottish Highlands as it can in the Black Forest.

It is a perennial, smooth and very aromatic herb. The elongated root is crowned with fibers. The leaves, mostly springing from the root, are divided into leaflets which are further cut into numerous thread-like segments which gives them a feathery appearance.

The stem is about 6 or 8 inches high, and bears umbels of white or purplish flowers.

The aromatic flavor of the leaves is somewhat like Melilot and is communicated to milk and butter when cows feed on the herbage in the spring. 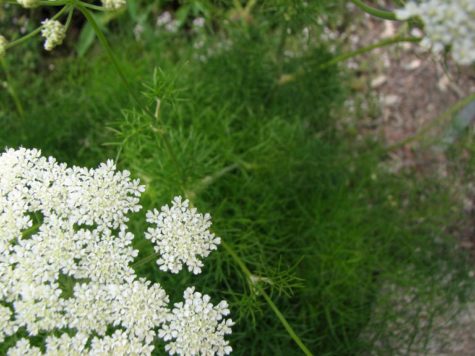 In German it is known as Bärwurz [bear wort], feminine gender (die) for the plant and masculine gender (der) for a variety of Bavarian schnapps which is flavored with its extract. 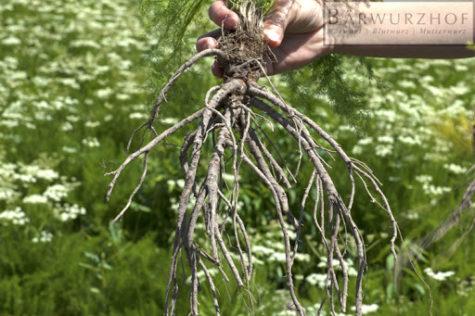 “The Spignel root is warm and has a dry strength. The powder is a remedy for high temperature fever and gout. The green root is crushed into vinegar and is used against jaundice.” – Hildegard of Bingen

No less than acclaimed German pharmacologist Hieronymus Bock praised the plant in 1539 in his “Kreutterbuch” (‘Herbal Book’) as an all-purpose weapon against ailments of all kinds. Alpine Lovage was also used extensively during births…both for humans and for cows!

The English botanist and herbalist, Nicholas Culpeper (1616 – 1654) mentioned the use of Spignel in his writing, where he wrote that it was an excellent herb to improve both appetite and digestion and that it should work well as a remedy for excessive flatulence, belching, colic, and stomach aches.

According to Culpeper, the powdered root should be administered along with sugar, or as an extract of the root in water, white wine or beer and taken every morning and evening for few days, in order to regulate menstruation, ease childbirth and to promote the expulsion of the afterbirth.

Both the root and leaves of Spignel have a reputation as a good treatment for snake bites and coughs, and in the past, it was believed that an alcohol extract of the herb had aphrodisiac properties.

Spignel appears in all of the important herbal books of the Middle Ages and the Renaissance. At the advent of the 19th century, Spignel fell into obscurity as a medicinal plant. The remedy remains popular in veterinary medicine. And, over the last several decades, Germans have rediscovered the healing properties of this herb.

In Germany today, health trends currently favor the rediscovery of traditional German medicine and klosterheilkunde. And, as with many of Hildegard’s remedies, the primary curative properties of Spignel apply to the stomach, addressing digestive issues, and promoting internal cleanse.

Folk medicine appreciates use of the Spignel root only, and typically by excavating, cleaning, and drying in autumn. Before use, preparation includes boiling in water or wine, or grinding into powder. 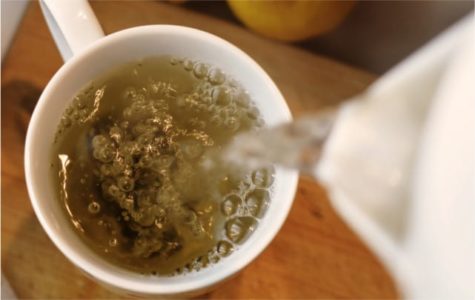 Pour 250 ml hot water over 1 teaspoon of seeds and allow 20 minutes to infuse before straining. This combination helps with migraine, lack of appetite, and mild bladder problems.

For stomach and abdominal pains, the powdered Spignel root and honey are boiled into a mixture of 1:3. One teaspoonful of this mixture is used for internal discomfort, including ulcers. Ayurvedic tradition recommends against the practice of boiling honey. As an alternative to honey, replace honey with raw cane sugar and some water.

To make a Spignel tincture at home, pour double grain or ethyl alcohol over the roots of the Spignel in a screw cap glass until all parts of the plant are covered. Allow the mixture 2 to 6 weeks to steep. Then strain and pour into a dark bottle.

Take 10-50 drops of this tincture one to three times a day. If overly concentrated, dilute the mixture with water. 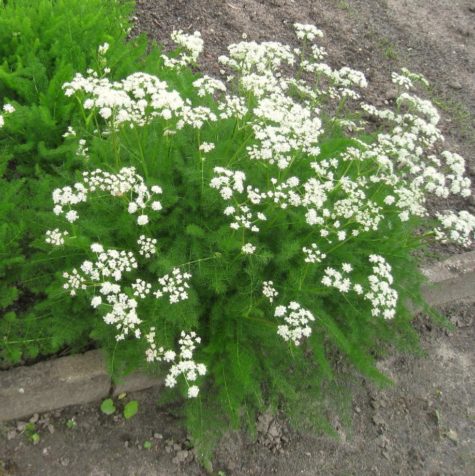 Baldmoney or Spignel is a very ornamental is somewhat rare British native perennial with fine, almost fern-like leaves. It is a luxuriant natural perennial native also in the mountainous areas of Europe, where it grows in alpine meadows. In Britain it grows best in the sheep-grazed Scottish Highlands.

The leaves are beautiful, dark green and as fine as the maidenhair fern. The inflorescences are typical of the umbellifers, appearing about midway through summer they are creamy white in flat heads about 5-7cms across and growing up to 60cm in height. Meum athamanticum is long-lived, and given the space improves with each year. 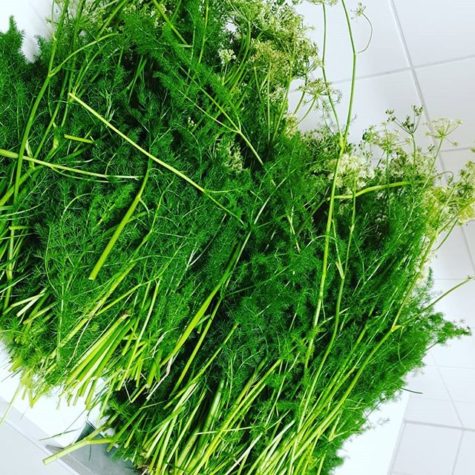 Some have compared the taste to lovage, anise, dill, caraway and curry. Since every part of the plant contains all of these aromatic qualities, it is also used in recipes for all kinds of foods.

This versatile medicinal plant also works as a spice or herbal salt in the kitchen. In contrast to dill, Spignel retains its aroma even when dried. Spignel stimulates immediate appetite (but moderates long-term appetite) and promotes digestion. The fine dill-like foliage and the subterranean plant parts have a strong, intense taste.

The leaves of Spignel have a flavor reminiscent of curry and the herb is locally often referred to as “the curry plant”. The finely chopped leaves can be used to spice up soups, potato dishes, omelets, fish, meat and vegetable dishes, or in any curry dishes as a replacement.

In addition, the chopped leaves can be used to add a sprinkle of green and a light curry flavor to egg sandwiches, cheeses, fish balls, and white or light sauces. The whole leaves can be added to meat and fish dishes.

The root has a powerful, spicy taste and can be suitable as a spice for casseroles and soups. Both leaves and roots have also been used in soups and stews.

The Spignel plant bears close relationship to fennel and dill. It grows in the mountains, between 600 and 2000 meters above sea level. The ideal soils for Spignel include acidic, nutrient-poor soils, and lean pastures. Traditional use of Spignel root stocks includes processing into gentian-like schnapps and liqueurs or culinary food seasoning.

Bärwurz seeds also proved to be an export hit for the Black Forest region in centuries past. “Bärwurzsalz”, or baldmoney salt, was created by taking the leaves harvested in the springtime, drying them and mixing them with sea salt. 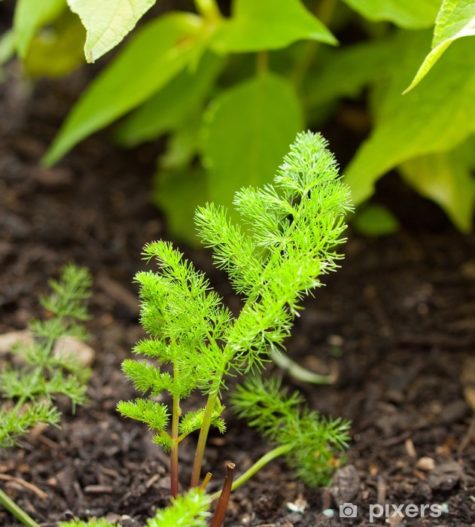 Usually the meum athamanticum is propagated by root splitting after flowering, small root pieces are enough to grow a plant. Difficulty often arises in growing Spignel directly from seeds. If possible, sow in pots in Autumn or very early in Spring outdoors, the seeds will not germinate for long.

The Spignel likes sandy, loamy or clay rich, lean and moist soil, the location should be sunny or semi-shady. Spignel thrives in larger pots. Do not fertilize with calcium (chalk).

Since the plant loves consistent conditions, such as stable soil moisture, it can be somewhat difficult to cultivate in some areas. However, in the right setting, this plant needs little attention. The strong main carrot like root ensures the plant can survive even in difficult conditions. In better soil, development into a dense clump is faster. 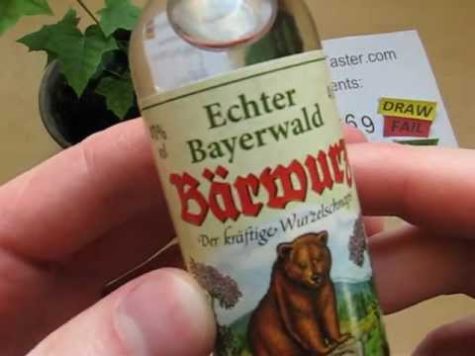 The particular name of this plant, “Bald Money” is said to be a corruption of Baldar, the Apollo of the northern nations to whom the plant was dedicated.

In German it is known as Bärwurz [bear wort], feminine gender (die) for the plant and masculine gender (der) for a variety of Bavarian schnapps which is flavored with its extract.

The Bärwurz plant bears the botanical designation Meum athamanticum, and the feminine form in the German language. That has to do with the fact that “Wurz” is essentially short for “Wurzel” (root), which is feminine in German. But once it’s distilled, German-speakers have to remember that the spirit takes on the masculine form in the language.

And while those familiar with the German language might be tempted to think that the distilled spirit’s masculine character is somehow related to Bär, which means “bear” in German, it isn’t. Not at all, in fact.

The root is used for the distillate called “Bärwurz”, but most distilleries use the more highly cultivated masterwort. The stoneware bottles it comes in are as integral a part of a Bavarian forest dinner as bread and bacon.

Christoph Keller also distills a pure Bärwurz spirit at his Brennerei Stählemühle distillery, but he only uses the seeds. His fascination with the plant began when his architect friend Hardy Happle brought Christoph a 24-pound sack of seeds from his own Bärwurz pasture in Bavaria, which Christoph then distilled into an extremely limited edition spirit.

When used moderately, there are no known side effects related to Spignel. According to older writings, larger amounts of Spignel root may lead to headaches.

Related Posts
Alfalfa
Thuja aka Arborvitae
Lovage
Elder Tree
Bilberry
Explore The Content
Search
Browse The Herbs
Recent Posts
Subscribe
If you'd like to be informed whenever anything new is posted, you can subscribe via email:
Pages Of Interest
Theraputic Qualities
Bread Crumbs
A trail of bread crumbs in case you lose your way exploring the encyclopedia... Encyclopedia Of Herbology > Weeds and Wild Flowers > Spignel aka Bald Money
Archives
Browse The Website
Find Us On Facebook
Related Content