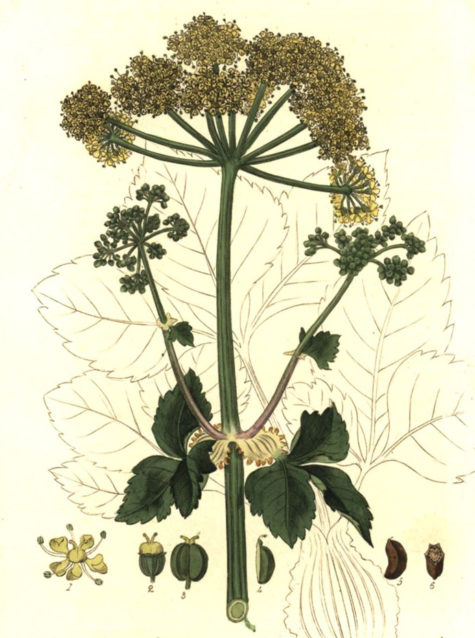 Also called Black Lovage, this tall, Mediterranean umbellifer was introduced to Britain and northern Europe by the Romans and taken to North America in the 16th century.

Known to Theophrastus and Pliny the Elder, its roots are diuretics, its leaves make a healing juice for cuts and its crushed seeds were a popular condiment. Pliny recommended chewing “Alexander’s herb” with aniseed and a little honey in the morning to sweeten the breath.

Alexanders is native to the Mediterranean but is able to thrive farther north. It was a highly popular herb during the time of Alexander the Great. The Romans called it the ‘pot herb of Alexandria.’

Alexanders was a traditional plant for cleansing the blood and a digestive herb for strengthening the stomach. Alexanders was carried on ships as a remedy against scurvy, and herbalists used it to relieve stomach and urinary problems. It was also a remedy for headaches, toothaches, swellings of the body, cuts and bruises, asthma and consumption, or tuberculosis. Juice from the plant can be used to clean cuts and wounds, and the eaten plant also aids digestion.

The plant is used as traditional medicine in China. 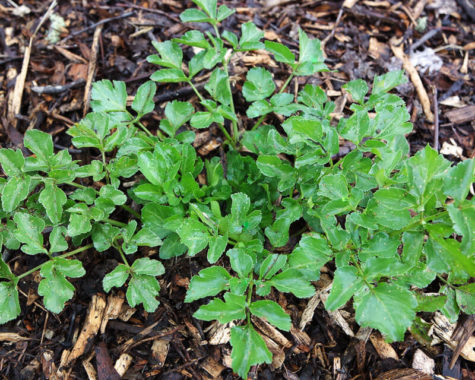 John Evelyn, in his 1699 Acetaria: A Discourse of Sallets [Salads] describes Alexanders as a “moderately hot, and of a cleansing faculty,” comparing it favorably to parsley.

“Ellicksander Pottage” was described by Robert May in The Accomplish’t Cook (1660):

“Chop ellicksanders and oatmeal together, being picked and washed, then set on a pipkin with fair water, and when it boils, put in your herbs, oatmeal, and salt, and boil it on a soft fire, and make it not too thick, being almost boil’d put in some butter.”

According to Culpeper it was an herb of Jupiter, and he recommended the aforementioned Alexander pottage. Culpeper also noted:

“It warms a cold Stomach, and opens stoppages of the Liver and Spleen, it is good to move Women’s Courses to expel the After-birth, to break Wind, to provoke Urine, and help the Strangury [painful urination caused by bladder diseases or kidney-stones]. It is also effectual against the biting of Serpents.” 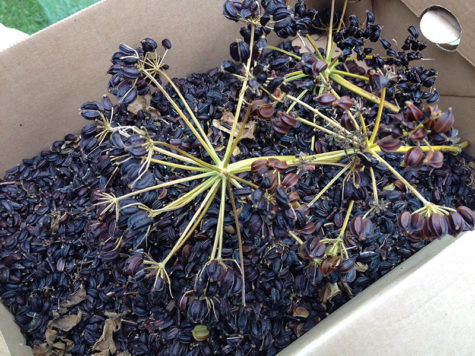 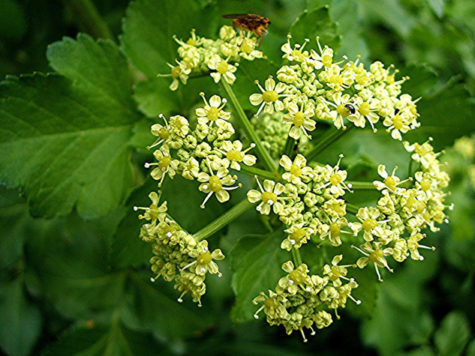 From Health Benefits Times, we have this information on the health benefits of Alexanders:

Scurvy is the disease caused mainly due to insufficiency of Vitamin C. It results in swelling and bleeding of gums and also weakening. Alexanders were used for curing such problems in the teeth when any other herb rich in Vitamin C were not accessible to support.

Alexanders plant was anciently used to cure dropsy. Dropsy is actually a swelling of the tissue layers in the body resulting due to accumulation of water. Person suffering from dropsy in the before years, would use this plant’s oil and extracts in order to get cured of the swelling.

Alexanders herb acts as an Emmenagogue. Emmenagogue is an herb that is consumed for increasing blood flow in pelvic and uterus parts of the body. Any disorder in the menstruation cycle of a woman which is caused not due to pregnancy then they can intake emenagogue to cure it. Seeds of alexanders, when consumed along with wine, act as Emmenagogue and helps in menstruation.

Alexanders also acts as very good wound healers. Leaves of the plant are rich in the field of soothing the cuts and minor abrasions. Leaves of the alexanders are crushed well and the juice is being applied over the wounds and cuts which have the power to heal the injury, the recovery speed being quite fast.

Alexanders has been used for centuries as a diuretic that will help control various diseases such as kidney, stones, urinary tract infections and gallbladder stones. Roots of the plant has diuretic effects.

Alexanders consists of good amount of vitamin C that makes the benefit to boost the immune system of the body. When our immune system is strong, it can protect us from several diseases.

Asthma is considered one of the chronic diseases. Seeds produce a high aromatic scent which is comparable to the strong myrrh-like scent that is used for the treatment of asthma. Asthma is a disease that affects our lung.

Alexanders is considered one of the beneficial herbs for digestion. Fiber contained in this plant helps to cure some diseases that may affect your stomach such as reflux, peptic ulcers and constipation. Powdered seeds also have been known to warm the cold stomach. 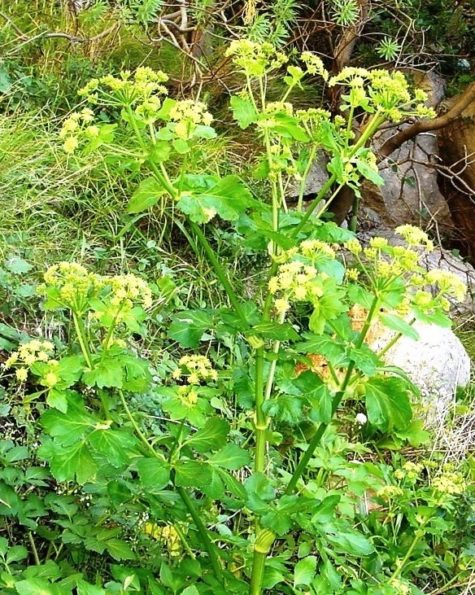 About 5 feet high, it grows along sea coasts of southern Britain and northern Europe. The leaves resemble Angelica but are bright and glossy and aromatic, the flowers are yellow, shining with nectar, and the seeds a dark brown.

The flowers are arranged in umbels, and its fruits are black. It flowers from April to June.

This plant may be distinguished from the other Lovage plants by the fruit having eight prominent wing-like appendages. The species are perennial herbs, chiefly found in south-eastern Europe. 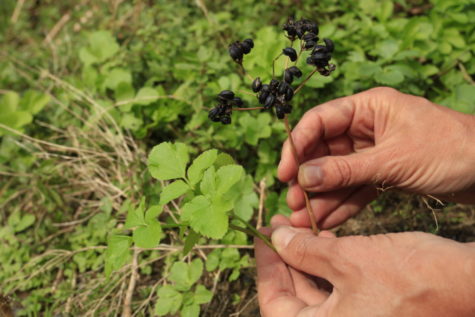 In the wild, Alexanders can be found mainly coastal areas growing in great swathes along roadsides, cliffs, sea walls and path edges but can be found inland occasionally in meadows and the edges of woods.

Alexanders are well worth growing in the garden. Sow fresh seed in the late summer. Seed is best sown in an outdoor seedbed in autumn and planted into its permanent position in late spring. Germination can be slow. The seed can also be sown in situ in spring.

Alexanders is a Biennial growing to 1.2 m (4ft) by 0.7 m (2ft 4in). It is hardy to zone (UK) 6 and is not frost tender. It is in flower from May to June, and the seeds ripen from June to August. The species is hermaphrodite (has both male and female organs) and is pollinated by insects. The plant is self-fertile.

It is noted for attracting wildlife, and bees love it. Alexanders attracts many interesting insects, in particular hover flies and shield bugs. The flowers have an aromatic smell not unlike honey. A few plants in the garden will look lush and green in late winter when nothing else has yet appeared. Around a pond it can provide good early spring cover for frogs. However – take care it can dominate a small garden.

A good plant for food forests/forest gardens, it grows well on the sunny edge of a  woodland garden, in dappled shade, a shady edge, or a hedgerow. Alexanders prefers a moist well-drained soil and can tolerate maritime exposure.

The plant comes into growth in the autumn and the leaves are often available throughout the winter.

To harvest or pick the leaf stems, seek the lower specimens nearer the ground, you should be able to cut about 15 cm of pinkish stem from here. 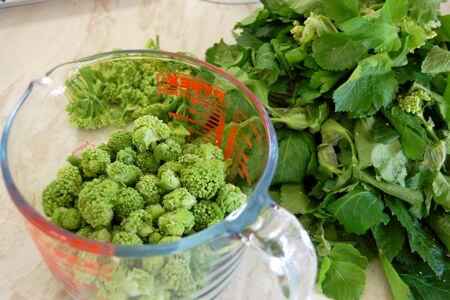 Alexanders was once known as ‘black potherb’ because of its black, spicy seeds. It is often found growing in ancient monastic ruins where it was once cultivated as a kitchen garden herb by monks.

Every part of the plant is edible. It was once used in many dishes, either blanched, or not, but it has now been replaced by celery. The black seeds have a taste that has been described as both spicy or peppery.

Alexanders were used in medieval cuisine in place of a bitter type of celery. One 17th century text describes young shoots used in salads or a “vernal pottage” and an early 18th century recipe recorded by Caleb Threlkeld for Irish Lenten Potage includes alexanders, watercress and nettles.

Alexanders fell out of favor in the 18th century after celery started being mass produced to replace wild herbs and vegetables. Alexanders are not commonly used as a food product in the modern era, but have found some renewed use in exotic “foraged” food recipes and restaurants.

Look for this tall plant on cliff paths; the first seaside greenery of the year. Roman soldiers would carry the plant on long journeys, as they could eat the leaves, the stems, the roots, and the buds. Alexanders is a feed source much appreciated by horses.

Leaves and young shoots are used raw in salads or cooked in soups, stews etc. They have a rather strong celery-like flavor and are often blanched (by excluding light from the growing plant) before use. Leafy seedlings can be used as a parsley substitute. The leaves can used as a salad or potherb.

The smell can be quite strong but this will disappear whilst cooking.

To enjoy these as a fresh vegetable – similar to asparagus – try peeling the stems and boiling them for five to ten minutes, or until tender. Do the same with unripe flower heads, or eat them raw.

Larger leaves can be blanched briefly, while younger ones can be eaten raw.

The leaves and stalks can be blanched or steamed to add to soups, broths and stews.  It tastes somewhat like celery, but is more pungent. The stem is often blanched (by excluding light from the growing plant) before use. 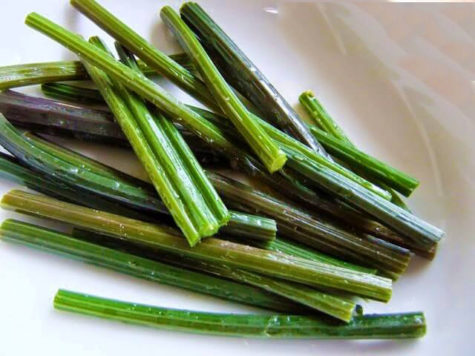 You can also candy the stems like angelica, to use for decorating cakes or to eat as a sweet snack.

First, boil the peeled stems in a pan of water and sugar (one cup of each) for 10 minutes. Then drain and lay them on a non-stick parchment that has been covered with caster sugar, and sprinkle some more on top. When they’re dry, shake off the excess sugar and store in a sealed, dry container.

The leaves which are rich in Vitamin C can also be picked, washed, and eaten raw as a spicy, aromatic addition to any salad. Also the Flower buds can be eaten raw, or even pickled.  Added to salads, they have a celery-like flavor. The spicy seeds are used as a pepper substitute.  A recipe for Alexanders Seed Bread can be found here: Eating To Live.

Both the ripe and unripe flower heads can be dipped in tempura batter and deep fried until golden, Japanese style.

The perennial root can be boiled or candied, the young stems stewed or braised. Boiled and used in soups, its flavor is somewhat like parsnip. The root is said to be more tender if it has been kept in a cool place all winter.

Scrub, peel and slice the roots – much like you would with parsnips – toss them in sunflower oil, season, then roast at 180 degrees Celsius for 20 minutes or so, until tender.

Alexanders have a particular affinity with fish and were a common vegetable on the many fish or fasting days that were once compulsory in Britain. A typical Elizabethan recipe begins with “Alexander buds cut long ways, garnished with whelks.” 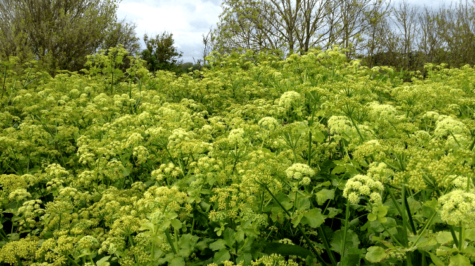