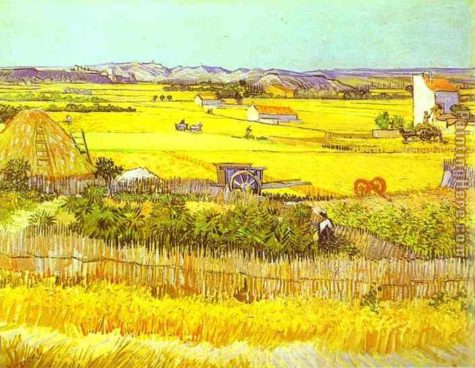 The word “yellow” comes from the Old English geolu, geolwe, meaning “yellow, yellowish”, derived from the Proto-Germanic word gelwaz. It has the same Indo-European base, –ghel, as the word yell; –ghel means both bright and gleaming, and to cry out. Yellow is a color which cries out for attention.

According to the Oxford English Dictionary, the oldest known use of this word in English is from The Epinal Glossary in the year 700.

In Ancient Egypt, yellow was associated with gold, which was considered to be imperishable, eternal and indestructible. The skin and bones of the gods were believed to be made of gold.

The Egyptians used yellow extensively in tomb paintings; they usually used either yellow ochre or the brilliant orpiment, though it was made of arsenic and was highly toxic. A small paintbox with orpiment pigment was found in the tomb of King Tutankhamun. Men were always shown with brown faces, women with yellow ochre or gold faces.

The Dark Side of Yellow

Yellow is the only color that reacts badly to black: Add a little black and it becomes a sickly yellow-green.

In some cultures and situations, the color yellow represents cowardice, betrayal, egoism, and madness. Furthermore, yellow is the color of caution and physical illness (jaundice, malaria, and pestilence). Perhaps it’s no coincidence that the sources of yellow pigments are toxic metals – cadmium, lead, and chrome – and urine.

The original formula for Indian yellow, the bright yellow long used in Indian miniatures was banned due to the way it was made. Cows were poisoned with mango leaves and the color was made from their urine.

In Russia, a colloquial expression for an insane asylum used to be “yellow house.” Bright “marigold” yellow may be associated with death in some areas of Mexico. Those condemned to die during the Inquisition wore yellow as a sign of treason.

A yellow patch was used to label Jews in the Middle Ages. European Jews were forced to wear yellow or yellow “Stars of David” during the Nazi era of prosecution.

Interestingly, in China, adult movies are referred to as yellow movies.

Although yellow occupies one-twentieth of the spectrum, it is the brightest color, the most luminous of all the colors. It’s the color that captures our attention more than any other color.