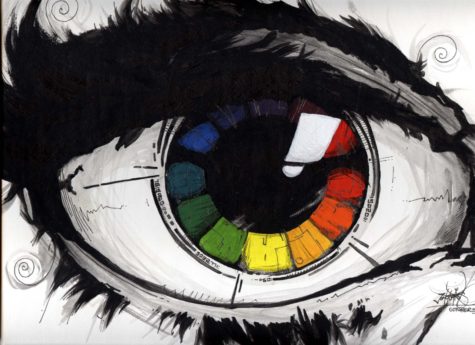 Try to imagine reddish green — not the dull brown you get when you mix the two pigments together, but rather a color that is somewhat like red and somewhat like green. Or, instead, try to picture yellowish blue — not green, but a hue similar to both yellow and blue.

Is your mind drawing a blank? That’s because, even though those colors exist, you’ve probably never seen them. Red-green and yellow-blue are the so-called “forbidden colors.” Composed of pairs of hues whose light frequencies automatically cancel each other out in the human eye, they’re supposed to be impossible to see simultaneously.

The limitation results from the way we perceive color in the first place. Cells in the retina called “opponent neurons” fire when stimulated by incoming red light, and this flurry of activity tells the brain we’re looking at something red. Those same opponent neurons are inhibited by green light, and the absence of activity tells the brain we’re seeing green. Similarly, yellow light excites another set of opponent neurons, but blue light damps them. While most colors induce a mixture of effects in both sets of neurons, which our brains can decode to identify the component parts, red light exactly cancels the effect of green light (and yellow exactly cancels blue), so we can never perceive those colors coming from the same place.

Almost never, that is. Scientists are finding out that these colors can be seen — you just need to know how to look for them.

Colors without a name:

The color revolution started in 1983, when a startling paper by Hewitt Crane, a leading visual scientist, and his colleague Thomas Piantanida appeared in the journal Science. Titled “On Seeing Reddish Green and Yellowish Blue,” it argued that forbidden colors can be perceived. The researchers had created images in which red and green stripes (and, in separate images, blue and yellow stripes) ran adjacent to each other. They showed the images to dozens of volunteers, using an eye tracker to hold the images fixed relative to the viewers’ eyes. This ensured that light from each color stripe always entered the same retinal cells; for example, some cells always received yellow light, while other cells simultaneously received only blue light. 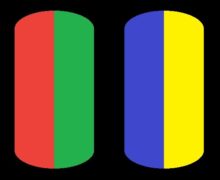 The observers of this unusual visual stimulus reported seeing the borders between the stripes gradually disappear, and the colors seem to flood into each other. Amazingly, the image seemed to override their eyes’ opponency mechanism, and they said they perceived colors they’d never seen before.

Wherever in the image of red and green stripes the observers looked, the color they saw was “simultaneously red and green,” Crane and Piantanida wrote in their paper. Furthermore, “some observers indicated that although they were aware that what they were viewing was a color (that is, the field was not achromatic), they were unable to name or describe the color. One of these observers was an artist with a large color vocabulary.”

Similarly, when the experiment was repeated with the image of blue and yellow stripes, “observers reported seeing the field as simultaneously blue and yellow, regardless of where in the field they turned their attention.”

It seemed that forbidden colors were realizable — and glorious to behold!

Crane’s and Piantanida’s paper raised eyebrows in the visual science world, but few people addressed its findings. “It was treated like the crazy old aunt in the attic of vision, the one no one talks about,” said Vince Billock, a vision scientist. Gradually though, variations of the experiment conducted by Billock and others confirmed the initial findings, suggesting that, if you look for them in just the right way, forbidden colors can be seen.

Then, in 2006, Po-Jang Hsieh, then at Dartmouth College, and his colleagues conducted a variation of the 1983 experiment. This time, though, they provided study participants with a color map on a computer screen, and told them to use it to find a match for the color they saw when shown the image of alternating stripes — the color that, in Crane’s and Piantanida’s study, was indescribable.

“Instead of asking participants to report verbally (and hence subjectively), we asked our participants to report their perceptions in a more objective way by adjusting the color of a patch to match their perceived color during color mixing. In this way, we discovered that the perceived color during color mixing (e.g., red versus green) is actually a mixture of the two colors, but not a forbidden color,”

When shown the alternating stripes of red and green, the border between the stripes faded and the colors flowed into each other — an as-yet-unexplained visual process known as “perceptual filling in,” or “image fading.” But when asked to pick out the filled-in color on a color map, study participants had no trouble zeroing in on muddy brown. “The results show that their perceived color during color mixing is just an intermediate color,” Hsieh wrote in an email.

So if the color’s name is mud, why couldn’t viewers describe it back in 1983? “There are infinite intermediate colors … It is therefore not surprising that we do not have enough color vocabulary to describe [them all],” he wrote. “However, just because a color cannot be named, doesn’t mean it is a forbidden color that’s not in the color space.”

Fortunately for all those rooting for forbidden colors, these scientists’ careers didn’t end in 2006. Billock, now a National Research Council senior associate at the U.S. Air Force Research Laboratory, has led several experiments over the past decade that he and his colleagues believe prove the existence of forbidden colors. Billock argues that Hsieh’s study failed to generate the colors because it left out a key component of the setup: eye trackers. Hsieh merely had volunteers fix their gaze on striped images; he didn’t use retinal stabilization.

“I don’t think that Hsieh’s colors are the same ones we saw. I’ve tried image fading under steady fixation … and I don’t see the same colors that I saw using artificial retinal stabilization,” Billock said. In general, he explained, steady eye fixation never gives as powerful an effect as retinal stabilization, failing to generate other visual effects that have been observed when images are stabilized. “Hseih et al.’s experiment is valid for their stimuli, but says nothing about colors achieved via more powerful methods.”

Recent research by Billock and others has continued to confirm the existence of forbidden colors in situations where striped images are retinally stabilized, and when the stripes of opponent colors are equally bright. When one is brighter than the other, Billock said, “we got pattern formation and other effects, including muddy and olive-like mixture colors that are probably closer to what Hseih saw.”

When the experiment is done correctly, he said, the perceived color was not muddy at all, but surprisingly vivid: “It was like seeing purple for the first time and calling it bluish red.”

The scientists are still trying to identify the exact mechanism that allows people to perceive forbidden colors, but Billock thinks the basic idea is that the colors’ canceling effect is being overridden.

When an image of red and green (or blue and yellow) stripes is stabilized relative to the retina, each opponent neuron only receives one color of light. Imagine two such neurons: one flooded with blue light and another, yellow. “I think what stabilization does (and what [equal brightness] enhances) is to abolish the competitive interaction between the two neurons so that both are free to respond at the same time and the result would be experienced as bluish yellow,” he said.

You may never experience such a color in nature, or on the color wheel — a schematic diagram designed to accommodate the colors we normally perceive — but perhaps, someday, someone will invent a handheld forbidden color viewer with a built-in eye tracker. And when you peek in, it will be like seeing purple for the first time. 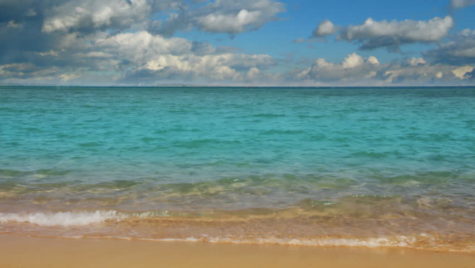 Many people enjoy relaxing by the seaside in summer. The predominant colors are the blues of the sea and sky, which introduce a feeling of expansiveness and peace. Turquoise tempers the deeper blues with an extra sense of calm and comfort. The golden yellow of sand and sunlight energize the body’s systems, helping to restore balanced functioning by reducing anxiety and stress levels, and, creating happiness and clarity in the mind. It is no wonder with today’s hectic lifestyle that two weeks doing nothing and simply being on a beach in the sunshine is regarded by many as the perfect holiday and one which they will repeat each year with unfailing regularity.

The same color combination of blues and golds occurs in many desert or near desert conditions and it is perhaps significant that in the past many people have sought the deserts of the world as places of mysticism for contemplation, visions, and religious inspiration. With such isolation, very few distractions and the stimulus of blues gold, and yellows, directly affecting the function of the nervous system, such places encourage the deepest thought.