When students were given creativity tests, those whose test-cover pages had a green background gave more creative answers than those whose pages were white, blue, red or grey. ~Sue Shellenbarger 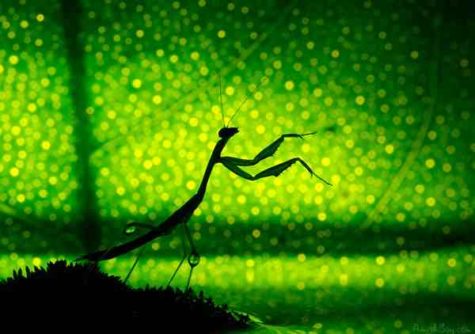 Since the beginning of time, green has signified growth, rebirth, and fertility. In pagan times, there was the “Green Man” – a symbol of fertility. In Muslim countries, it is a holy color and in Ireland, a lucky color. It was the color of the heavens in the Ming Dynasty.

The word green comes from the Middle English and Old English word grene, which, like the German word grün, has the same root as the words grass and grow.

It is from a Common Germanic *gronja-, which is also reflected in Old Norse grænn, Old High German gruoni (but unattested in East Germanic), ultimately from a PIE root *ghre– “to grow”, and root-cognate with grass and to grow.

The first recorded use of the word as a color term in Old English dates to ca. AD 700.

Latin with viridis (and hence the Romance languages, and English vert, verdure etc.) also has a genuine term for “green”. Likewise the Slavic languages with zelenъ. Ancient Greek also had a term for yellowish, pale green – χλωρός, chloros (cf. the color of chlorine), cognate with χλοερός “verdant” and χλόη “the green of new growth”.

For the ancient Egyptians, green had very positive associations. The hieroglyph for green represented a growing papyrus sprout, showing the close connection between green, vegetation, vigor and growth.

In wall paintings, the ruler of the underworld, Osiris, was typically portrayed with a green face, because green was the symbol of good health and rebirth.

Palettes of green facial makeup, made with malachite, were found in tombs. It was worn by both the living and dead, particularly around the eyes, to protect them from evil. Tombs also often contained small green amulets in the shape of scarab beetles made of malachite, which would protect and give vigor to the deceased.

It also symbolized the sea, which was called the “Very Green. Interestingly, in Japan, the words for blue and green (“ao“) are the same.

Today, green is no longer just a color. It’s now the symbol of ecology and a verb. Today’s greens can be found in a wide range of objects: pea soup, delicate celadon glazes, sleazy shag carpet, sickly bathroom walls, emeralds, wasabi, and sage. The English language reflects some strange attributes: Would you rather be green with envy, green behind the ears, or green around the gills? (Idiomatic American English for extremely envious, immature or nauseated.)

Green in other cultures:

Green is usually considered lucky. A green shamrock symbolizes this. However, this is not always true in every culture, venue, or situation. For example:

There are more shades of green than that of any other color. Greens range from yellow-greens, such as lime and avocado greens, to those with a blue tinge (such as emerald).  Aqua or turquoise are colors that are typically half green and half blue.

Color Blindness – Approximately 5% – 8% of men and 0.5% of women of the world are born colorblind. People who are protans (red weak) and deutans (green weak) comprise 99% of this group.

Some European countries have outlined certain traffic light colors so that it is clear which is green and which is red, by the color that has a rectangle around it. Some states in the U.S. have placed diagonal lines through green traffic lights as an aid for the colorblind.

Green exit signs have an important advantage when there is smoke in the air (in other words, when a fire is burning). With red exit signs, it looks like a fire – firemen have actually rushed into burning buildings and tried to put out the signs! With a green sign, people know it isn’t the fire itself but the way to safety.