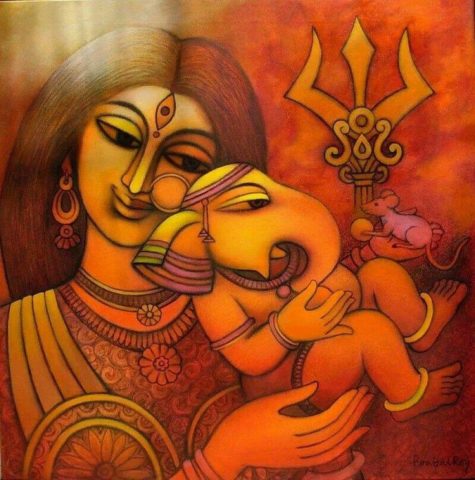 Ganesha is India’s cutest god. He has the head of an elephant on which is perched a dainty tiara, four pudgy hands joined to a sizeable belly with each hand holding its own symbolic object. One has a trishul, or a trident, the second, an ankush, or goad made from his very own broken tooth, the third hand elegantly holds a lotus and the fourth a rosary (which is sometimes replaced by modaks – his favourite sweet). His appetite for sweets is legendary and offerings of them are often left at his shrine.

Ganesha is famous not only for being a trickster and for his sense of humour, but equally for his wisdom. He is the son of Shiva (Destroyer in the Hindu Holy Trinity of Creator-Preserver-Destroyer) and Parvati (Shiva’s consort).

The chubby, gentle, wise, elephant-headed Ganesh, or Ganesha, is one of Hinduisms most popular deities. He is the remover of obstacles, the deity whom worshipers first acknowledge when they visit a temple. He is also patron of letters and of learning; he is the legendary scribe who, using his broken tusk, which he often holds, wrote down parts of the Mahabharata epic.