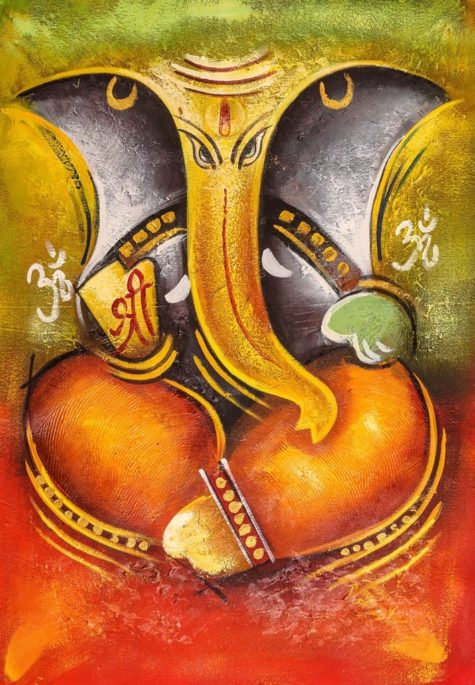 What is a Shloka?

Shloka is a Sanskrit word referring to a verse, proverb, hymn or poem that uses a specific meter. It is considered as the classic basis for epic Indian poetry as its use is widespread in traditional Sanskrit poems. Among the famous texts written entirely in shlokas are the “Ramayana” and “Mahabharata.”

Technically, a shloka can be made up of any sort of four-line stanza with up to 26 letters in a single line. In terms of yoga practice, it is likely that a yogi who meditates will come across this classical form of verse in the mantras that can help one meditate effectively.

Meaning: We meditate on Lord Ganesha – who is clad in white (representing purity), who is all pervading (present everywhere), whose complexion is gray like that of ash (glowing with spiritual splendor), who has four arms, who has bright countenance (depicting inner calm and happiness) and who can destroy all obstacles (in our spiritual and worldly path).

Meaning: The Lord with the curved trunk and a mighty body, who has the luster of a million suns, I pray to thee Oh Lord, to remove the obstacles from all the actions I intend to perform.

Meaning: I worship day and night that elephant faced Lord Ganesha who is like sun to the lotus face of Mother Parvati. Giver of many boons, the single tusked Ganesha, I salute Thee to give me a boon.

Meaning: The Lord with the elephant face, served by all the Ganas, One who takes as His food, the essence of Kapitta and Jamboophala (these are two favorite fruits of Ganesha), son of Uma (Mother Parvati), destroyer of misery of the devotees, controller of obstacles, we worship Your Lotus Feet.

Meaning: We invite You, the Lord of spiritual faith (of Lord Shiva). You are the wisest among the wise, the best to be given as a standard of comparison. You are the senior Lord, Lord of the Vedic mantras, listening to our prayers. Please visit our home with prosperous things and be seated here.

Meaning: We meditate on that super power, we invoke the single tusked boon giver, Ganesha.

Meaning: I prostrate before Lord Vinaayaka who joyously holds modaka in His hand, who bestows salvation, who wears the moon as a crown in His head, who is the sole leader of those who lose themselves in the world. The leader of the leaderless who destroyed the elephant demon called Gajaasura and who quickly destroys the sins of those who bow down to Him, I worship such a Lord Ganesha.

Meaning: I meditate eternally on Him, the Lord of the Ganas, who is frightening to those not devoted, who shines like the morning sun, to whom all the Gods and demons bow, who removes the great distress of His devotees and who is the best among the best.

Meaning: I bow down with my whole mind to the shining Ganapati who brings happiness to all the worlds, who destroyed the demon Gajasura, who has a big belly, beautiful elephant face, who is immortal, who gives mercy, forgiveness and happiness to those who bow to Him and who bestows fame and a well disposed mind.

Meaning: I worship the ancient elephant God who destroys the pains of the poor, who is the abode of Aum, who is the first son of Lord Shiva (Shiva who is the destroyer of triple cities), who destroys the pride of the enemies of the Gods, who is frightening to look at during the time of world’s destruction, who is fierce like an elephant in rut and who wears Dhananjaya and other serpents as his ornaments.

Meaning: I constantly reflect upon that single tusked God only, whose lustrous tusk is very beautiful, who is the son of Lord Shiva, (Shiva, the God of destruction), whose form is immortal and unknowable, who tears asunder all obstacles, and who dwells forever in the hearts of the Yogis.

Meaning: He who recites this every morning with devotion, these five gems about Lord Ganapati and who remembers in his heart the great Ganesha, will soon be endowed with a healthy life free of all blemishes, will attain learning, noble sons, a long life that is calm and pleasant and will be endowed with spiritual and material prosperity.