The Story of False Face

The story of False Face as told by Mad Bear Anderson. 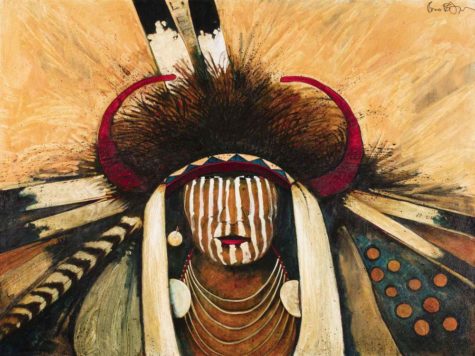 I will tell you his story – who he is and how he came to look like that. But he is gone on now, evolved beyond this. These Beings have graduated and gone to a higher world – and they are high, high, high, beyond us. Yet we keep the False Face in this form and we pay honor and respect to it. It reminds us of a lesson far ahead of us – a hard lesson that we have yet to learn.

I call him False face even though that wasn’t his name at his time. That was never the name of him or his people but that is how we refer to it. False Face had studied and learned all the basic things in the universe. Then he had prepared and developed himself in all the medicine ways. It took centuries of hard work, but eventually he developed all the spiritual powers known on this Earth. He knew all the ways of the Creator.

One day False Face stood out in a large field looking at the skies and at the mountains in the distance. And he thought to himself: Knowing as I do all the ways of the Creator, all things in this world are possible for me. I now understand how all things are done. Why, if it should be my will, those mountains should have to move.

And then he heard the voice of the Creator whom he knew as the Great Lord of the Universe. The voice said, “Yes, I am the Lord and the mountains are there by my will.”

False face paused for a moment. Many times he had heard the voice of the Creator; but now he was thinking only of himself. Speaking aloud, he announced in a powerful voice, “I have come to know the ways of the Lord and I can duplicate them all! I can move these mountains if I wish!”

And the Creator repeated, “Yes, I am the Lord and I can move mountains.”

“Not you!” shouted False Face. “I am referring to myself, I am talking about me. Have I developed all this for nothing? Can I do nothing myself? I have learned all the rules of power and creation! Do you still think I am useless without you?”

“You are never without me,” the Great Spirit answered in a gentle voice, “for I am always with you.”

“But I know all your secrets now,” False Face protested. “I know how you do all these things.”

“It is because you have come to me,” said the Great Spirit.

In spite of all that he had learned, in spite of all his training and wisdom, False Face experienced a rush of great pride and anger, and he shouted at the Creator. “Go away. Leave me alone. I don’t need you anymore. I am now powerful and you want to think of me as your little child. I am not your little child anymore. I can do anything that you can do. So just leave me alone.”

“Alone?” said the Great Spirit. “There is no alone. How can I leave you? We are one and cannot be apart.”

These gentle, loving words only made False Face more angry. It seemed to him, in his anger, that the Lord was discrediting him in spite of all his long efforts and the remarkable knowledge and power that he had attained. It seemed to him that the Great Spirit was still claiming all power for himself.

In his angry state, False Face determined to have a contest with the Lord of the Universe and he challenged Him. “I know you don’t want these mountains moved, Lord. But I am going to move them against your will. Then you will see that I am something in my own right. You can pit your power against me if you wish, Lord!”

“I do not pit anything against anything,” answered the Lord. “This idea of a contest is a temporary dream. Wake up and come to me now and you will see that nothing is anything in its own right apart from all that is.”

But False Face repeated his challenge, “You are trying to take everything away from me, Lord. You cannot take this chance away. Do what you like. Oppose me if you like, but I am going to move these mountains anyway, knowing that you want them where they are, so that it will be clear that it is done by my will alone.”

False face waited there in the field, grim and determined, and there was nothing but silence. So he went about the contest. Though he strained with all his might, trying everything that he had learned and developed over the centuries, nothing happened. Nothing at all. There was only a soft breeze, and the mountains stood in the distance as always. he flew into a rage, cursing in a way that cannot be repeated and, when there was only silence, daring the Lord to respond. He called the Great Spirit a fake and a liar, claiming the Creator had pitted his Great Will against him in spite of promising he would not.

Then an idea occurred to him. He would have his contest yet. He shouted at the Lord, daring the Lord to move the mountain while he tried to block Him with his own will as the Lord had done to him. He believed that if the Lord had neutralized his power then he could do the same to Him. But he also believed that the Lord might well want the mountains where they were and would be unwilling to move them. In either case, nothing would happen. He craved to claim victory over the Lord and he felt sure he would win his dare.

He shouted his challenge again. He clenched his fists and squinted his eyes and screamed into the sky; and before he could finish his sentence, he heard a trembling and a rumbling. He spun around to look just as the mountain was coming to his side. That was a mistake, for that caused the mountain to strike his face and break his nose.

And at that the gentle voice of the Great Spirit was heard again. “Now look what we have done to our beloved self. No matter. It is very temporary. We shall now set it right with our collective will, shall we?”

False Face felt a moment of great pain, and then he had a sudden awareness. There was no contest. There had never been any contest. This was another of his countless lessons. But this was the ultimate lesson and he had arranged it – he and His Own Self – so that he could be free from the desire to be a separate, independent something in its own right. So that he could be free from being apart and alone.

Mad Bear went on to say:

“Just think what we have to look forward to. After all our learning and development, we are still going to come to that last great contest – that last big hurdle for the powerful ego. Isn’t that something? But once you have made that last hurdle, that’s it. Then you graduate and go on to a higher level. “