From the Sacred Path Cards, we have this Dreamtime Smoke Signal story by Jamie Sams. 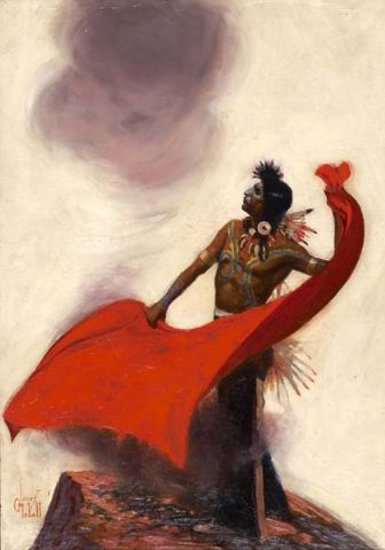 On a night years ago, I was floating in a natural hot spring looking up into the fullness of Grandmother Moon high above me in the starry night. I had built a Fire twenty feet in front of me where the ravine was flat and treeless. I had gone to this special place alone to seek some answers for my hungry heart.

The tears of frustration rolled from my eyes and sent silver circles into the effervescent waters of the pool. I sought the answers of how to return to the city and deal with the lack of substance I found in those who were trying to be “somebody” instead of being who and what they were.

Then, I saw an ancient Medicine Man walk to my Fire and lift an old red trade blanket. He walked toward me and dipped the blanket into the pool, wrung it out, and moved back toward the Fire. As he turned toward the Fire and began to sing, I recognized Grandfather Taquitz, who is one of the Ancestors who guides my path. Grandfather Taquitz beseeched the spirits of the Four Directions. The energy began to build as he sang the chant in which he called to the Great Star Nation to hear my prayers and speak to my heart.

Each time I spoke an internal prayer, Grandfather Taquitz would move the trade blanket over the Fire and then raise it, allowing the Smoke Signal that represented my prayer to rise in the indigo night. At first, a stray Cloud Person or two drifted by and then others came to see which Two-legged and which Ancestor spirit had called them.

The Chief Cloud Person was to the right of Grandmother Moon and began changing form as the Smoke touched his face, producing the faces of Buffalo, Wolf, Eagle, and Bear. My Allies had come to greet me and give me answers! I was overjoyed and nearly missed the exit of Grandfather Taquitz, who held a gleam in his eyes and a knowing smile traced across his mouth.

I floated in the warm waters of my Earth Mother’s womb and heard the messages of my Medicine Helpers with my heart. Buffalo told me that Two-leggeds who hurt one another were those deluded by the fear of scarcity. These humans had lost their trust in Great Mystery and the Field of Plenty. Their need to be important was based upon the fear that their talents were not equal to those of others.

Wolf spoke and told me that the Pathfinders of my world would never need to boast about who they were or where they were headed. Those who broke new ground for others to follow were to busy to be hurt by another person who claimed, out of envy, to be who they were not.

Eagle spoke to me and said that true freedom was only to be found by those that found illumination through the truth that lived inside their hearts.

Bear then appeared and spoke of the strength I needed to find inside of myself in order to Walk My Talk in the city, away from the womb of my Earth Mother. Bear said that the tomorrows are met when each person seeks strength in the truth of today.

Knowing that my intent had reached the Sky Nation through Grandfather Taquitz’s Smoke Signals and songs gave me new inspiration and purpose. I was ready to hold my truth high and to use my intent to touch the hearts of my fellow Two-leggeds. I no longer needed to be hurt by lies or to take on the pain of those that “talked their walk” instead of being the beauty that Great Mystery had created them to be.