From the Sacred Path Cards, we have this Dreamtime Medicine story by Jamie Sams which helps to bring understanding of the Shield of the West in the Medicine Wheel. 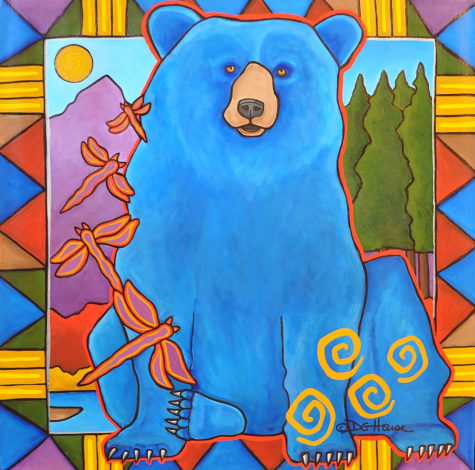 The Bear came to me in a Dreamtime waking state several years ago and lumbered through my awareness to take me on a Dreamtime Medicine Walk. I found myself in a forest high in the Rocky Mountains by the old burial ground near Creede, Colorado.

The Bear wandered up to the spring above Moonshine Mesa and drank deeply of the cold, pure water coming from the Earth Mother’s breast. Then Bear turned to me and spoke.

“We used to use words like you Two-leggeds,” she said. “we retreated into our silence at the end of the Second World. When the Earth was cleansed by the great ice mountains your people had finally come together in clans and families. They had heard the tundra Wolf’s song and started to use words of their own.”

“We knew that you humans would not be alone and that humans would survive if they could communicate with one another. We Creature-beings had to leave the Two-leggeds alone so they could learn their own sounds and how to use communication.”

“Unfortunately, that was also the time that Two-leggeds shared so many of the opinions of others that they started to judge their personal truths. They began to worry about what others thought and failed to find their own answers within their hearts.”

I understood that Bear was trying to show me how we Two-leggeds sought approval, entangling ourselves with the fear of being different. If new ideas presented a threat, it could be hard for individuals to follow their personal truths.

Bear continued, “It was during those days of the ensuing cold that humankind learned to eat meat. In the first world, the Two-leggeds had been vegetarian. Fruits, berries, roots, and wild vegetables were plentiful until the cleansing of the First World.”

“When the great ice mountains moved across Mother Earth’s face, the plants, which had sustained all creatures, vanished. The Two-leggeds were starving until they learned to eat meat. The Creature-beings, who understood the need for balance and sharing, offered their bodies as food to the Two-leggeds. My Creature Ancestors gave the warmth of their bodies’ fur and the instinct of survival to the Two-leggeds. Then through consuming the meat of Bear, the West Shield’s lessens were learned.”

“I have a memory of the way our gift was received by a female Two-legged.” Bear said. “She was called Alona. Alona ate of the meat of Bear and sank into a fulfilling, deep sleep. She saw the memories of our Bear Clan and learned the three paths of the West Shield.”

I listened as Bear continued. “In the dream, Alona watched Grizzly as she ate all that she could find in the way of berries, honey, and fish from the stream. This giantess was filling up for hibernation time when she would have to live off her stored fat.

“Then Alona saw Grizzly go into her cave to sleep through winter’s white robe. In her dream Alona followed Grizzly and slept at her side. In the Spring when Grizzly awoke, Alona followed her into the deep green forest. Grizzly seemed very intent on rediscovering the forest and noting the changes in her favorite hollow logs. The deep winter sleep had propelled Grizzly into a new state of awareness.”

“Mama Grizzly had left Alona to her thoughts and had gone to forage through the forest continuing her routine,” Bear said. “It was only when Alona was left to her own devices that a tiny, still voice spoke to her silent heart, and showed her the value of Grizzly’s lessons. Alona saw that in tasting the fruits of all ideas, you could expand one’s outlook on life, just as Grizzly had done by eating all manner of foods.”

“Then Alona remembered the retreat into the cave. Grizzly had taught her to go into the silence of her own Sacred Space to digest her ideas. The ideas that did not sustain her could be eliminated and the others would nurture her during the time of looking within. Alona realized that she could best meet her goals when she acted on the ideas that were most nurturing to her.” 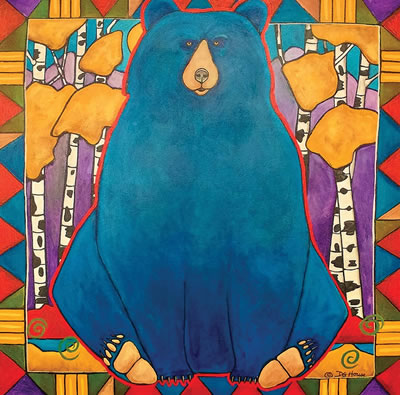 I looked at Bear’s big brown eyes and smiled. I was beginning to understand the West Shield in a new way.

“So the three pathways to understanding how to look within and reach our goals are like the actions of Grizzly in Alona’s dream, right?” I asked.

“Right,” Bear replied. “Now you tell me how you see those paths.”

I thought for a moment and then spoke. “The first path is to enter the stillness of our Sacred Space. Basically, it is being willing to receive the answers made available to us through the experience of daily life. That is, allowing our female receptive side to come forward to magnetize or receive in the silence. So it is Entering The Silence.”

“Well, I suppose the next step is digesting the answers that come and learning to feel which ones apply. So the second pathway is integrating the information and discerning what our personal truth is,” I replied.

“Right again,” said Bear. “It is on the second step, which nurtures the answers received, that the third path becomes evident.”

“Oh, I understand,” I said. “It is because the third path is structure based on personal truth. If we have a knowing about our digested ideas, we may then formulate a plan on how to attain our goals, that’s the structure. If our goals are based on our personal truth and desire, they will be approached with joy. They will be goals we want to nurture because they are truly our own, not ones that others have expected of us. That’s right, isn’t it?”

Bear chuckled and rolled over scratching her back on the boulder next to the spring. “You have the idea,” she mused. “All the actions of Grizzly will allow each person to tap their inner-knowing and like Alona of long ago, my Clan can give the strength necessary to meet each tomorrow with joy. There is no need to fear the unknown that future holds if you follow Grandmother Grizzly and digest the knowing of your personal truth.”

I thanked Bear for the lessons and began the journey of understanding my personal West Shield. May this sharing also aid you in your joy-filled sojourn to the land of the Bear and the lessons of the West.