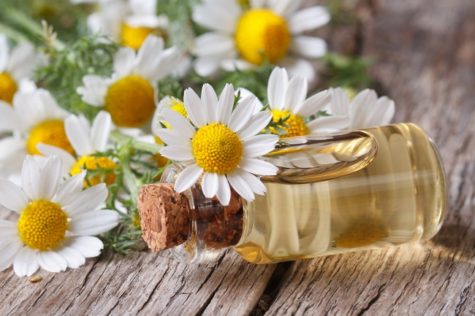 There are several types of chamomile essential oil. German Chamomile is an excellent variety and its beautiful deep dark blue color, due to its high azulene content, comes as a bonus. Another excellent variety, Roman chamomile, is particularly good for the treatment of nervous conditions and insomnia. Beware though of chamomile Maroc (Ormenis multicaulis) which is not a true chamomile and cannot be used as such.

Chamomile is that wonderful yellow daily-like flower that is used for everything: cosmetics, fragrance, oil, herbal baths, soothing tea. The root is used for toothache and the entire plant in herbal therapeutics. The whole plant is used from root to flower. The essence is obtained by steam distillation of the flowers. Chamomile smells sweet, resembling fresh golden apples, and this fruity scent has given it the name of Manzanilla in Spanish-speaking countries.

The Egyptians had a great reverence for Chamomile and used it in massage oils to remove aches and pains. Sports-minded people will like using the flowers in a bath for relaxation and to ease aching muscles. This plant was one of the favored strewing herbs of the Middle Ages, to sweeten the air of a room and create a relaxing atmosphere.

The scent is rejuvenative and especially helpful to those of a sensitive nature. Inhaling the herby, aromatic, slightly bitter but always refreshing scent of Chamomile will ease your depression, soothe your irritable nature, lull you into a restful sleep and calm you. Use the oil straight or use it in combinations to relax and soothe a busy household after a trying day.

A busy person might like dabbing a drop or two of Chamomile oil on the forearm, to inhale occasionally during the day , for relaxation and to allay temper. Remember that oil of Chamomile is recommended for use in the diffusor, in a child’s room, for the anesthetic, for the calm that will come, for sweet sleep.

German chamomile has been highly esteemed for over 3,000 years and has been used for many types of skin conditions and stress related complaints.

Diffuse, add to food or water as a dietary supplement, or apply topically on location. Among the gentlest oils used in aromatherapy, the chamomiles are suitable for use on children.

Dispels anger, stabilizes emotions, and helps release emotions linked to the past. It may also be used to soothe and clear the mind.

If pregnant or under a doctor’s care, consult your physician.

Diffuse or apply topically on bottom of feet, ankles, wrists or on location. Add to food or soy / rice milk as a dietary supplement. Among the gentlest oils used in aromatherapy. All of the chamomiles are suitable for use on children.

Because it is calming and relaxing, it can combat depression, insomnia, and stress. It minimizes anxiety, irritability, and nervousness. It may also dispel anger, stabilize the emotions, and help to release emotions that are linked to the past.

If pregnant or under a doctor’s care, consult your physician. Test for skin sensitivity.

Roman chamomile neutralizes allergies and increases the ability of the skin to regenerate. It may help calm and relieve restlessness and tension. Its anti-infectious properties benefit cuts, scrapes, and bruises It is a cleanser of the blood and also helps the liver discharge poisons. 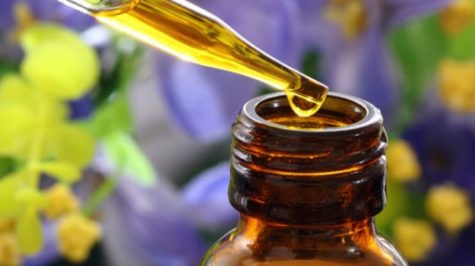 What follows is a list of the indispensable precautions for the safe use of essential oils. If you experience a problem in spite of everything, the first two guidelines are intended to counteract emergencies arising out of unintended contact with sensitive skin areas and mucous membranes.

As their name implies, essential oils do not mix with water. If they did, they wouldn’t float to the surface in a steam distiller, where they can be collected easily by separation flow. So it is important to remember if essential oils should ever irritate sensitive skin, they cannot be diluted with water. Water will cause the oils to burn even more. A comparison can be made to an oil fire: Water will tend to spread such a fire rather than extinguish it. Essential oils must be diluted with some type of vegetable oil.

By the very nature of extraction, essential oils are highly concentrated substances. Essential oils, because of their highly concentrated state, must never come into contact with mucous membranes or sensitive areas of the skin. If essential oil is accidentally splashed into the eye, the irritation is very intense The oil must be diluted immediately. Almond oil is mildest for the eyes, but any pure vegetable oil will help. Put it on a cotton ball and delicately dab at the eye.

When essential oils come in contact with other areas of sensitive skin (armpits, genital areas, face, etc), vegetable oil can be applied the same way to dilute the essential oil, thus reducing the irritation

This precaution must be taken, again, because the oils will not mix with the water but will float on top of it. When essential oils are used this way in a bath, the floating oil will stick to the skin in its concentrated form, particularly to the sensitive genital areas. This can cause a very unpleasant, even serious irritation, because hot bath water actually increases the irritation.

Instead, dissolve the oils first in powdered milk, egg yolk, or even coarse sea salt. Never try to use more than 10 to 20 drops of essential for one bath. For further safety, add the essential oil / powder mixture slowly over time while you are in the bath, rather than all at once.

My first advice to those with allergies is to choose the very highest quality oils you can find. Residues from chemical agriculture are in fact the most likely source of skin reactions. As much as possible certified 100% organic essential oils should be used. Do The Patch Test before using any new essential oil.

This is particularly true of citrus essences, extracted by cold-pressing. The most common case is that of the essence of Bergamot, but caution must be used with most citrus oils. Beyond the citrus varieties, I should also mention the essential oils of Angelica and African Marigold. Ignoring this rule when using these essential oils could result in brown skin patches which could become permanent. There may also be an increased risk of skin cancer.

This applies to the essential oils rich in phenols (thymol, carvacrol, eugenol). Examples include the phenol Thymes, Oregano, Savory, Clove, and Cinnamon Leaf. The essential oil of Cinnamon Bark is also very irritating. Also the oil of Lemongrass, concentrated in citrals, can be highly irritating.

This is the rule taught in medical and pharmacological courses concerning menthol. In natural aromatherapy, we do not use menthol in its pure state, but use instead the essential oil of Peppermint, which is very different. Nevertheless, as a supplementary precaution, I prefer to include this rule as it is learned in standard medicine.

This rule is self-evident, but must be restated because it is broken too often. It applies to all chemical products and medications.

This basic precaution does not preclude taking them in diluted form in an appropriate medium. Even so, problems that arise from taking essential oils internally are generally due to the fact that they are taken in a concentrated state which leads to rapid absorption in the stomach and a very quick passage into the bloodstream. Taking one or two drops of a mild essential oil of high quality, diluted in honey, does not entail any particular risk. It just requires good common sense.

Any essential oil kit must contain a vial of good quality carrier oil. This carrier oil is important not only for diluting the essentials, but also for safety in case an undiluted oil causes sensitivity, or is accidentally applied to a sensitive area. 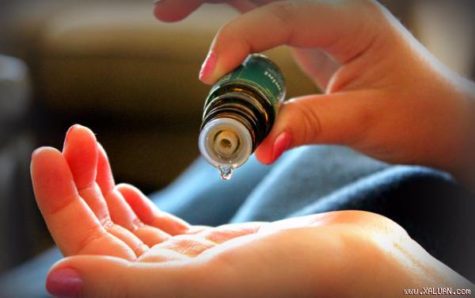 Some oils have been known to cause irritation, allergic reactions, or sensitivities on some people. However, all substances have been implicated to some degree in unpleasant reactions on someone… so it would be wise to try the patch test before using a new essential oil or any other cosmetic substance externally.

If you have sensitive skin or a history of allergies, then by all means use a patch test to gauge your relative sensitivity to essential oils.

Here’s how to do it:

Wash an area on your forearm about the size of a quarter and dry it carefully. Apply a drop of the essential oil. If you are very sensitive in general you may wish to dilute the oil equally with a bland carrier oil such as Olive oil and apply this dilution.

Then add a loose Band-Aid and wait 24 hours. If there is no reaction – terrific – go ahead and use the oil in your formulas. Do, however, keep all essential oils away from the eyes and from moist mucous areas in general.

From: The Aromatherapy Handbook 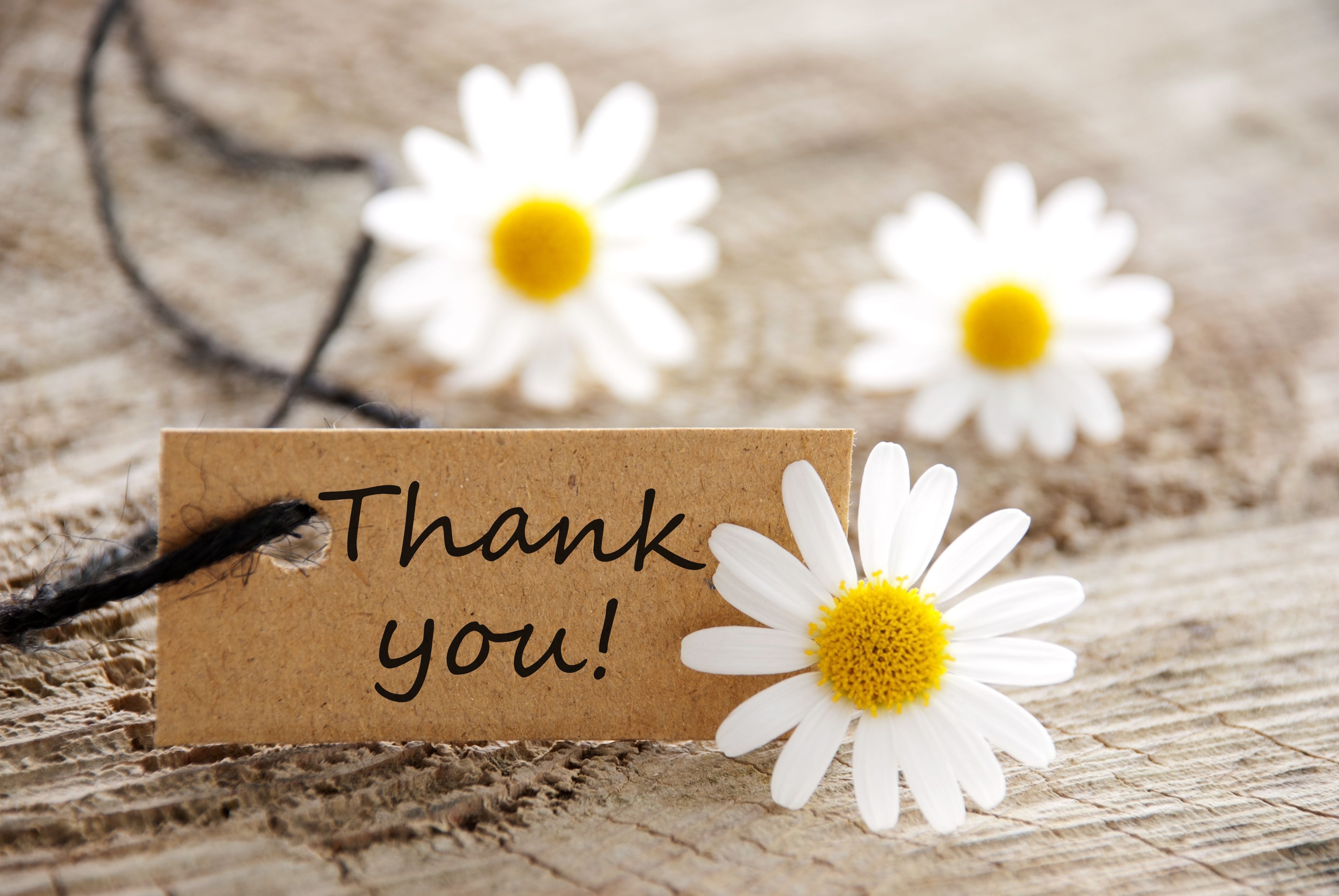