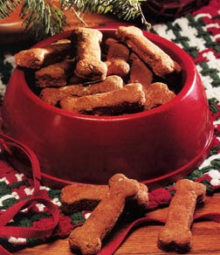 Mix all ingredients, adding more milk if needed to make dough firm. Roll out onto a floured surface to a 1/2-inch thickness. Use any shape cookie cutter to cut out biscuits, but bone shapes are fun!

Bake on ungreased baking sheet at 350 degrees for 30 minutes or until lightly toasted. To make biscuits harder, leave in oven with the heat turned off for an hour or more. 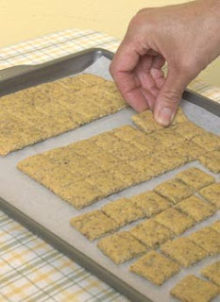 Preheat oven to 375 degrees. In a non-stick skillet, cook chicken until done; crumble into small pieces and set aside to cool. In a medium bowl, combine flour and cornmeal. In a small bowl, combine chicken broth, vegetable oil, egg, and tarragon; beat until well combined.

Stir wet ingredients into dry ingredients to form a soft dough. Knead chicken into dough. Working with ½ of the dough at a time, press dough into a rectangle and roll out onto parchment paper to ¼-inch thickness. Using a pizza cutter, cut into 1-inch squares.

Move parchment to a baking sheet and bake 20 to 23 minutes or until firm and dry. Cool on baking sheet; break squares apart. Repeat with remaining dough.

Store in an airtight container in refrigerator up to 1 week or in freezer up to 3 months. 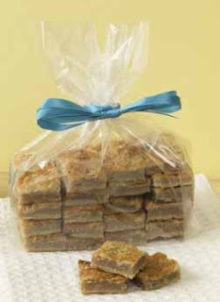 Preheat oven to 350 degrees. In a medium bowl, combine tuna and cottage cheese; beat until smooth, about 2 minutes. Add flour and stir until well combined. (Dough will be sticky.)

Use greased hands to pat dough into a lightly greased 8-inch square pan. Sprinkle cheddar cheese and Parmesan cheese on top. Bake 35 minutes or until edges are golden brown.

Cool and cut into 1-inch squares. Store in an airtight container in refrigerator up to 1 week or in freezer up to 3 months. 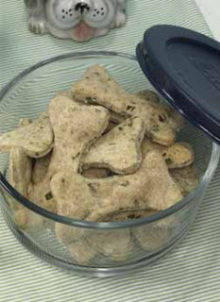 In a medium bowl, stir together flours, parsley, and mint. In a small bowl, combine water, vegetable oil, and honey. Add wet ingredients to dry ingredients; mix well to form a soft dough.

Working with 1/2 of the dough at a time, roll out on a lightly floured surface to 1/8-inch thickness. Cut out dough with cookie cutters, using desired shapes.

Transfer to a lightly greased baking sheet and bake 20-25 minutes or until lightly browned. Transfer biscuits to a wire rack to cool. Store in an airtight container in refrigerator up to 2 weeks or in freezer up to 3 months. 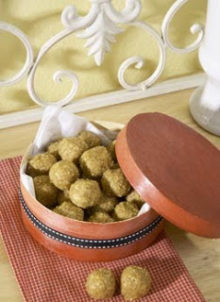 In a small bowl, combine cereal, peanut butter, and honey or molasses; stir until mixture forms a ball.

Scoop out teaspoonfuls of mixture and roll into 1-inch balls.(Balls can be rolled smaller or larger to suit the size of your dog.) Roll balls in wheat germ to cover.

Store in an airtight container in refrigerator up to 2 weeks. 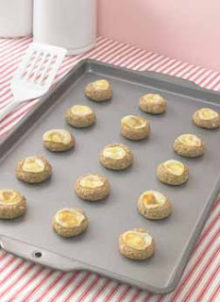 Using a tablespoon, scoop out dough and roll into balls. Place balls onto a lightly greased baking sheet. Using your thumb, press a slight indention into center of each cookie. Cut cheese sticks into 6 pieces and place into centers of cookies.

Bake for 20 minutes or until cookies are lightly browned on bottom. Store cookies in refrigerator for up to 2 weeks or in freezer for up to 3 months. 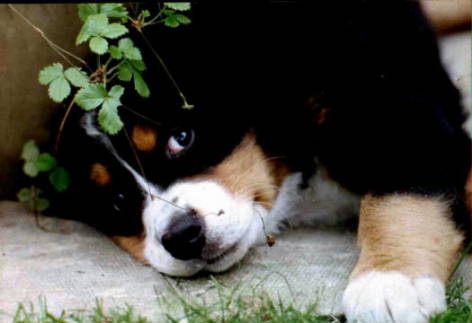 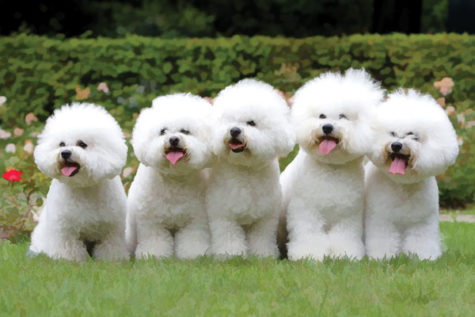 Bread Crumbs
A trail of bread crumbs in case you get lost ... Teach Your Dog To Behave > 2017 > December
Be Merry