Teaching Your Puppy to Drop It 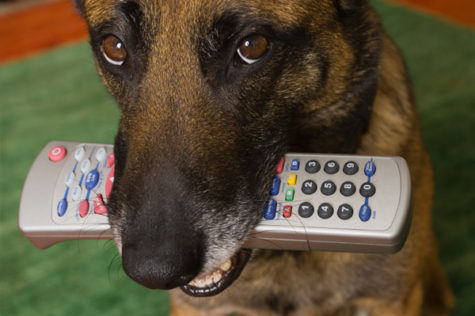 Spit that out of your mouth this instant, and never pick it up again.

When teaching this command, have your puppy on leash. You can either sit or stand, but try to keep a low profile, you want your puppy to forget you are watching.

As soon as the puppy picks up the item, say the command “Drop It!” in a sharp tone of voice. If your puppy does not spit the item out, or tries to run off with it, repeat the command “Drop It” in a louder, somewhat startling and more demanding tone, and at the same time give the leash a sharp jerk. If the leash correction isn’t sufficient to induce the puppy to drop the item, pull it from the puppy’s mouth, put it back on the floor, and wait to see if the puppy will pick it up again. If he does, repeat the correction, each time with a sharper tone and a stronger pop on the leash.

Do leave the item out where the puppy can see it and has access to it (under your direct supervision only). This will give you plenty of chances to reinforce this command.

Do not put the item out of reach until the puppy has decided not to pick it up again. Do not allow your puppy to run off with and keep the item.

Use this command ONLY with items you never want your puppy to have in his mouth. Do not use this command with toys or items that are sometimes OK to play with.

What your puppy learns:

Self control, and that everything in the world is NOT for the taking. This command also strongly reinforces your position of leadership in the relationship.

You are welcome to share this post but ONLY IF you give credit and a link back to Teach Your Dog To Behave or shirleytwofeathers.com.

Chewing appears to be an enjoyable behavior for nearly all puppies and many older dogs. In the young pup, healthy development of nervous and muscle tissue, as well as proper teething, depends on vigorous chewing exercise. In animals of all ages chewing is an important part of eating, investigation, and protection from entrapment.

Most puppies are basically a set of teeth with skin, hair, and other appendages attached somewhere behind. These guys play, release tension, eat, defend themselves, and explore the environment with their mouths. You must be prepared to accept the fact that puppy chewing may extend well into the first year of life, and will be directed toward everything within reach. 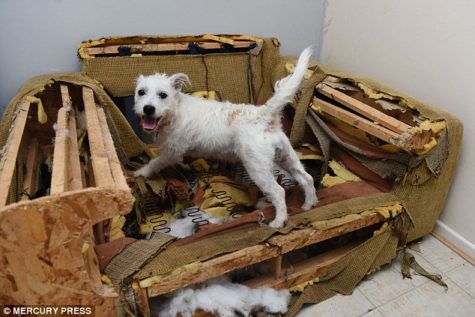 If you do not want to be faced with a situation such as the one pictured above, it will be important to provide the following:

The first important principal in preventing chewing problems which is that constant supervision or confinement must be consistently provided until the puppy is older and can be completely trusted. Until that time arrives, it is absolutely essential that the puppy be closely supervised 100% of the time when loose in the house, and when supervision is not possible, the puppy must be confined in a crate or safe area.

Now, let’s talk about supervision. For some owners, supervision means being in the same galaxy with the puppy. Fortunately, most owners realize that they need to at least be home to supervise. Here’s the thing… even being in the same room with a puppy is not the same as constant supervision, especially if the owner is on the phone, watching television, or otherwise engaged. Supervising a puppy means that eyes must be on the puppy at all times.

Puppies move very quickly and the time that it takes to grab something off the stove, or answer the phone is more than enough time for the puppy to eat a favorite book, destroy the couch, or chew into an electric cord.

Be aware of what your puppy is doing at all times. One way to achieve this is to keep the puppy on a leash or a tie out that allows for movement and exploration in an area that has been “puppy proofed.”

When adequate supervision cannot be provided, the puppy must be confined. Confinement areas can include a pen or a crate. Confinement is important when you are not at home, or if you are too busy to attend to the puppy properly. Just be aware that constant confinement teaches your puppy NOTHING, and undermines your relationship.

An acceptable chew toy is attractive to the puppy, virtually indestructible, safe and dissimilar to other objects around the house that the owner does not want chewed. This immediately removes from consideration such items as old shoes, stuffed toys, flimsy toys, and dad’s old socks. These types of items make it more difficult for the puppy to distinguish between the puppy’s toys and the owner’s things.

The number of toys which are provided is also important. I have found that three toys at a time are adequate. Too many toys at a time give the puppy the false impression that every item in the house is probably one of their toys. At the same time, puppies will sometimes get bored with the same old stuff, so it’s a good idea to switch things up every day or two by swapping toys. If an old favorite goes away for a few days and then suddenly reappears, it’s almost as good as a brand new toy.

It is important that all areas accessible to a puppy are puppy-proofed. Any objects that are dangerous or precious should be kept out of the reach of an exploring puppy. An object that was ignored all last week might suddenly become interesting and exciting next week. So take your puppy proofing seriously.

If the puppy develops a habit of chewing on furniture, wall molding or other objects that can’t be put out of reach, these may be painted with cayenne pepper paste, oil of citronella, or any of a variety of “no chew” products.

Avoid Contributing to the Problem

Besides guiding the puppy’s chewing in the right direction with proper chew toys, and taking measures to prevent mistakes with supervision, confinement, and a puppy-proofed environment, it is also very important that you do nothing to encourage excessive chewing tendencies. Teasing, tug of war games, and corrections given too long AFTER the inappropriate chewing can all contribute to unwanted chewing.

Certain puppies are just more oral than others and this tendency, coupled with stressful situations, can produce tension which may be released by chewing. Some situations which can cause excessive tension in puppies include highly emotional departures and homecomings by the owner, excessive attention from the owner, social isolation, boredom, and delayed feeding time.

For correction to be used effectively, the aversive stimulus must be of an appropriate intensity and given with correct timing. Unfortunately, most dogs are punished too harshly and too late. The correction should be just enough to elicit a response from the dog, but not so strong that a high degree of anxiety is produced.

Teaching your puppy some basic commands goes a long way to helping your puppy learn a measure of self-control. These commands could and should include : Sit, Stay, Down, and Come. Of these commands, the Stay command is the most important as it teaches your puppy that you mean what you say when you say it.

Adapted from an article written by Dr. Wayne Hunthausen 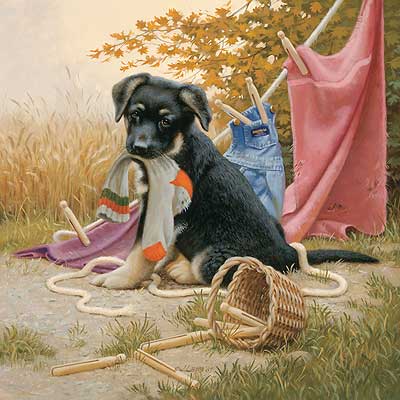 Chewing and play biting, how to control it and what do do about it.

Understand the causes – knowing WHY will help you decide WHAT to do.

Take appropriate action – do not sit back and expect that your puppy will suddenly “grow out of it.”

If your puppy is bored, teething or full of nervous energy:

If your puppy gets wired, and goes berserk biting and chewing:

If your puppy is regularly picking out specific items to chew on:

If your puppy is chewing on you to get attention:

If your puppy chews on you to stop you from doing something: 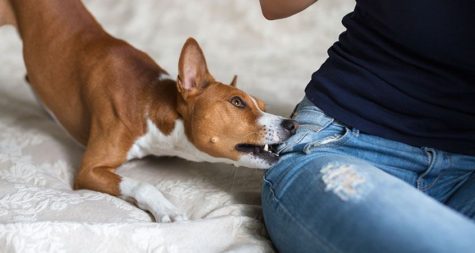 You are welcome to share this post but ONLY IF you give credit and a link back to Teach Your Dog To Behave or shirleytwofeathers.com.