What is a tick? 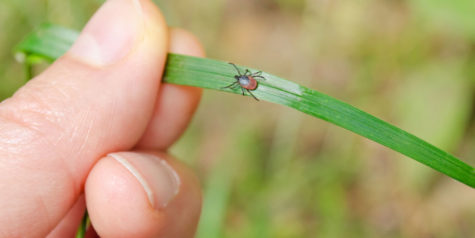 Ticks are small parasitic arachnids that live by sucking the blood of mammals, birds, and other animals. Not only a major nuisance to humans and domestic animals, ticks are also responsible for transmitting many diseases, including Lyme disease, Rocky Mountain spotted fever, and Ehrlichiosis. Although there are hundreds of tick species, the major species of concern in the United States are the deer tick, the American dog tick, the brown dog tick, the Rocky Mountain wood tick, and the lone star tick. 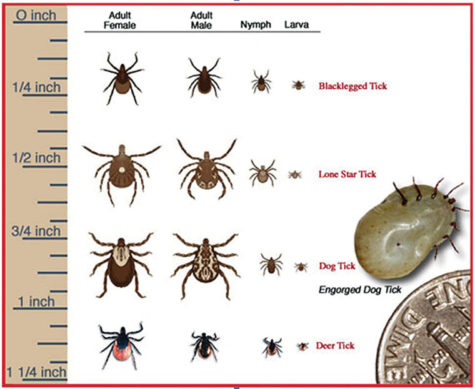 The deer tick (Ixodes scapularis), also known as the blacklegged tick, lives in the eastern and middle U.S. and also has a close relative on the West Coast. It attacks many animals including humans, deer, and pets. Known for infecting humans with Lyme disease, the deer tick can also transmit human granulocytic ehrlichiosis and babesiosis.

The American dog tick (Dermacentor variabilis) is found east of the Rockies as well as on the West Coast. It prefers dogs but will also bite humans and other large mammals. It can transmit Rocky Mountain spotted fever to humans. The brown dog tick (Rhipicephalus sanguineus) lives throughout the U.S., and though it rarely bites humans, it is a highly annoying pest to dogs and other pets. It is not known to transmit disease to humans.

The Rocky Mountain wood tick (Dermacentor andersoni) occurs in the Rocky Mountain region of the U.S. and southwestern Canada. It transmits Rocky Mountain spotted fever to humans and blood parasites to cattle and dogs. It also can inject dangerous toxins into the host as it feeds.

The lone star tick (Amblyomma americanum) is found in the southeastern and mid-Atlantic United States. It has a painful, itchy bite and can transmit ehrlichiosis, tick-borne typhus, and tularemia to humans.

A tick has eight legs, a tiny head, and a flat, seed-shaped body that swells up like a balloon as it feeds. Ticks that are only a few millimeters long before they bite can grow up to half an inch when engorged with blood. Their appearance varies depending on species, sex, and life cycle stage, but they are generally dark-colored, sometimes with distinctive patterns.

In each stage of a tick’s life cycle (larva, nymph, and adult) it searches for a host, using its ability to sense heat, light, and carbon dioxide. The tick often crawls to the top of weeds, grass, and other vegetation so that it can grab a passing host animal with its front legs. Once it has grabbed onto a host, it may bite any part of the body but usually prefers to crawl to the top of the host and bite the head, neck, or ears. The tick uses fanglike mouth parts called chelicerae to pierce the skin, and inserts a feeding tube called a hypostome. The hypostome is barbed, making it very hard to remove the tick by pulling. The tick drinks blood until it is full, then drops off the host to molt or lay eggs.

People typically acquire ticks in the spring and summer, while walking through tall grass, woods, and weedy areas. Many ticks can smell animals and are thus attracted to paths and trails where their potential hosts travel. They can also infest homes if carried indoors by pets. 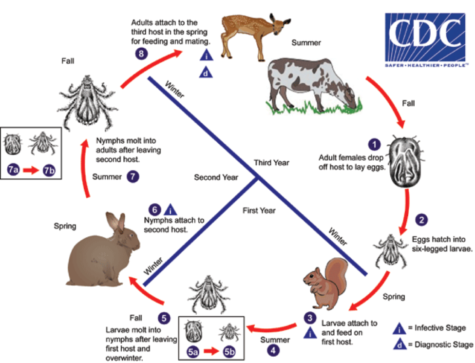 The Life Cycle of a Tick

Most types of ticks require three hosts during a two or three year lifespan. Each tick stage requires a blood meal before it can reach the next stage. Hard ticks have four life stages: egg, larva, nymph, and adult. Larvae and nymphs must feed before they detach and molt. Adult female ticks can engorge, increasing their weight by more than 100 fold. After detaching, an adult female tick can lay approximately 3,000 eggs.

Adult females drop off the host to lay eggs after feeding, usually in the fall. During the egg-laying stage, ticks lay eggs in secluded areas with dense vegetation. The eggs hatch within two weeks. Some species of ticks lay 100 eggs at a time, others lay 3,000 to 6,000 per batch.

Eggs hatch into six-legged larvae and overwinter in this larval stage. When spring comes, the larvae move into grass and search for their first blood meal. They attach themselves to their first host, usually a bird or rodent. Later in the summer, engorged larvae fall onto the ground and molt into nymphs, usually in the fall.

Nymphs (which are generally the size of a freckle) remain inactive during winter and start moving again in spring. During the following spring, the nymphs seek out and attach to the second host, usually a rodent, pet, or human.

The nymphs feed on the second host and after this blood meal, fall off the host and molt into adults – off the host – in the late summer or fall. Throughout the autumn, the male and female adults try to find a host, which is again usually a rodent, pet, or human. If adults cannot find a host animal in the fall, they can survive in leaf litter until the spring.

The next spring, adults seek out and attach to a third host, which is usually a larger herbivore, carnivore, or human. The adults feed and mate on the third host during the summer.

The adult female feeds for 8 to 12 days. The female mates while still attached to her host, then both ticks fall off, and the males die. The female remains inactive through the winter and in the spring lays her eggs in a secluded place.

Females may reattach and feed multiple times. The three hosts do not necessarily have to be different species, or even different individuals. Also, humans may serve as first, second or third hosts.

source: Parasites and Health at the Center for Disease Control